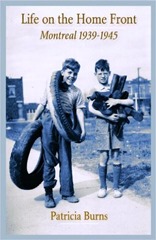 The Second World War came hard on the heels of a devastating Depression in which families struggled to survive. Life on the Home Front paints a poignant portrait of a city coping with the demands of war. Montrealers, along with other Canadians, were being asked for more sacrifice but this time it would include sending their sons,brothers, fathers and husbands off to war.
Montrealers had to "Use it Up, Wear it Out, Make it Do, and Do Without" as one slogan cautioned, and this they did. Many women went to work for the first time and often enjoyed the heady success of doing "a man's job"and earning a regular salary.


Life on the Home Front describes how dissent was also an ever-present reality. Montreal was often awash with anti-war banners and angry speeches which kept the police and journalists busy. Prime Minister William Lyon Mackenzie King had to walk a fine line in keeping the country together and united at a time of grave crisis.


All was not gloom and doom, however. Servicemen passing through Montreal as well as locals could enjoy the most vibrant nightlife in Canada. The cozy relationship between city officials, the police and the owners of "disorderly houses" as well as the shady characters who ran gambling establishments gave the name "Sin City "to Canada's metropolis.

(c)2016 Linda Sullivan-Simpson
The Past Whispers
All Rights Reserved

Posted by Linda Sullivan-Simpson at 7:18:00 AM No comments:

They Were So Young: Montrealers Remembering WWII

These gripping stories of young men and women who served in the army, navy, and air force during World War II are a testament to the raw courage, youthful bravado, camaraderie, and sacrifice needed to defeat a powerful enemy. Many who returned from the theatre of war were never the same again. Moving accounts by family members relate the impact the war had on their lives - the pain of losing a son, father, brother, or husband, and the welcoming of war brides into the family.

This is history that must never be forgotten.

BRYSON, Que. — Ivan Saunders stood in the kitchen at the Lions Club, filling a metal bowl — a particular metal bowl, so big you could bathe a dog in it — with cups of flour and bricks of lard. He started to spoon in baking soda, then paused, nodding at one of the dozen other cooks.

The cook walked to the kitchen’s electric panel, opened it and squinted at the faded label stuck to the inside of the panel door. Then he barked out the number of tablespoons of baking soda required and Saunders, 80, went back to mixing, spraying flecks of lard and flour onto his shirt.

Decades earlier, an old man who cooked at the logging camps in northern Quebec saw Saunders struggling with the dough and passed on his recipe. Ivan used a blue pen to scratch a few numbers and letters on the electrical panel as a reminder — more a code than a recipe. Those numbers have served ever since as the only written instructions guiding this contingent of amateur cooks in their summer ritual. They guard it carefully, always cognizant of their rivals in neighbouring towns.

Here, in Bryson, Que., a village of 647 people, west of the Gatineau Hills along the Ottawa River, the long weekend in August is reserved for the picnic. It is a festival with one purpose: to honour an extraordinary, endangered meat pie.

Posted by Linda Sullivan-Simpson at 6:37:00 AM No comments: 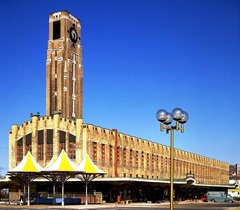 Atwater Market is a farmers' market located in the Little Burgundy area of Montreal, Canada. It opened in 1933. The interior market is home to many butchers and the Première Moisson bakery and restaurant.

The market's Art Deco building was designed by architect Ludger Lemieux, working with his son, Paul Lemieux. It is located on Atwater Street, near the Lachine Canal and the Lionel-Groulx Metro station, as well as Greene Avenue. A pedestrian bridge, which can also be used by bicycles, connects the market to Saint-Patrick Street and to a bicycle path in Pointe-Saint-Charles on the other side of the Lachine Canal.

The presence of this bridge explains the popularity of this market with bike riders, who often stop there, and greatly contributes to the great summer ambiance of the area. The bike path travels from the Old Port of Montreal to the Lachine Marina and is owned and maintained by Parks Canada.

The market is named for Atwater Street, named for Edwin Atwater (1808–1874), a municipal alderman of the district of Saint-Antoine. The street was named for him in 1871.

Born in West Farnham in the Eastern Townships, Lemieux studied at McGill University and worked in Montreal. He was associated for some time with Joseph-Honoré-MacDuff (1869-1918) but, in 1931, began working with his son Paul, with whom he designed the Atwater Market.

He was also responsible for the Tooke Brothers factory, the Workman Building, the Sainte Irénée Church (next to Atwater Market), and other buildings in Saint-Henri, including the fire station (no. 23) and the Saint-Zotique Church.

Posted by Linda Sullivan-Simpson at 6:14:00 AM No comments:

In 1887, Sainte-Cunegonde (now familiarly referred to as Little Burgundy) started playing host to the majority of Montreal’s black community. This working class neighbourhood generated as a result of nearby industry along the Lachine Canal. Important railway lines also ran close to the municipality and recruited the American black community to serve as porters on its trains. Immigrants were mostly attracted from New York and Washington.

Gradually, the neighbourhood welcomed Afro-Canadians (from Ontario and the Maritimes) and those from the Caribbean, too. Women were mostly hired to perform domestic work. After two waves of immigration - at the end of the nineteenth century and during the First World War - Caribbeans represented close to 40% of Montreal’s black community and most of them chose to live in Little Burgundy.

Human rights movements characterize the history of Little Burgundy. In 1902, a social club was founded to create a sense of mutual responsibility between its members; this Women’s Coloured Club of Montreal helped to resolve lodging problems and encouraged exchange and donation to provide for those less fortunate.

People came to this area in hopes of a better future and yet had to be patient for three decades before certain rights were guaranteed. The general misery of factory work, the poor working and living conditions and the poverty affected the black community more given very present racism and discrimination.

Fortunately, those social groups and the subsequent closeness of the community overcame the threat of overwhelming hopelessness. Instead, their hope was often manifested in the form of music. Jazz was introduced to Canada through the influence of gospel singing and the importance of native songs to the Afro-Americans. 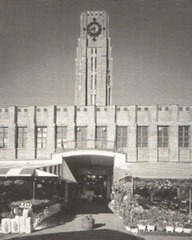 Atwater Market was the border between Saint-Henri and Little Burgundy.

Peterson was born to immigrants from the West Indies; his father worked as a porter for Canadian Pacific Railway. Peterson grew up in the neighbourhood of Little Burgundy in Montreal, Quebec. It was in this predominantly black neighbourhood that he found himself surrounded by the jazz culture that flourished in the early 20th century.

Posted by Linda Sullivan-Simpson at 2:28:00 PM No comments:

The Shamrock and the Shield: An Oral History of the Irish in Montreal

Although there have been some Irish living in Montreal since the early 1600's, augmented by Irish soldiers arriving with the conquering British army, it was only in the early 1800's that an Irish presence was truly noticed.

By 1824 there were sufficient Irish in Montreal to organize the first St. Patrick's Day Parade, and ten years later the St. Patrick's Society was founded. In 1847 St. Patrick's Basilica, Montreal's first church built for the Irish Catholics opened--a year before thousands of sick Irish escaping the famine in Ireland arrived.

Posted by Linda Sullivan-Simpson at 3:19:00 PM No comments:

The History of a Sugar House 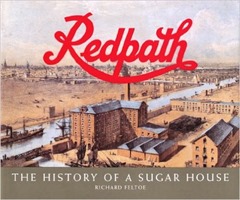 Redpath, today a household name for sugar in Canada, has its roots in the story of an enterprising Scots immigrant, initially a stone mason and later a building contractor during the boom days of Montreal’s growth from a small provincial centre to a major North American city. In 1854, the ever-energetic John Redpath, by then a self-made millionaire in his late fifties, launched a new career as an industrialist. With his son, Peter, and the gifted George Alexander Drummond as manager, he established Canada’s first successful sugar refinery.

The Redpath story encompasses the influence of sugar as an economic force, the emergence of the elegant social life of cosmopolitan Montreal and a hind-sight view of the complexities of the love-hate relationship between government and business.

This, the first of two volumes, moves through Canada’s period of extensive industrialization to the turn of the century, the impact of World War I and concludes in the post-war years. Throughout this period, the familiar Redpath trademark, a reproduction of John Redpath’s signature, is a reminder of the heritage inherent in Canada’s business and social history.

Posted by Linda Sullivan-Simpson at 7:12:00 AM No comments: