D is for Drummondville

Drummondville is a city in the Centre-du-Québec region of Quebec, located east of Montreal on the Saint-François River.

Drummondville was founded in June 1815 by Lieutenant-Colonel Frederick George Heriot. The purpose of the town was to provide a home for British soldiers in the War of 1812, and to guard the Saint-François River against American attacks. The town was named after Sir Gordon Drummond, the Lieutenant Governor of Upper Canada between 1813 and 1816.

1816 - The settlement of Drummondville was commenced in 1816, during the administration of Sir George Drummond.

Militiaman Thomas Runchey raises a corps of Africans out of the 400 black residents of Niagara; a company of 50 men is in arms by December 15, 1837, under the command of James Sears. A second African company is later raised in Niagara under Hugh Eccles, and the two will be joined to together to form the Coloured Corps with a combined strength of about 130 men. The unit will guard the frontier from Chippewa, Ontario to Drummondville, Québec during that winter. In the summer of 1838, Runchey runs off with the money due to his men and flees to the US.

C is for Cote-des-Neiges

Since I was born on the Island of Montreal very close to Cote-des-Neiges I thought a little history was in order.

Historically, the original settlement, the Village of Côte-des-Neiges, was founded in 1862 and annexed by Montreal in two parts in 1908 and 1910. In 1876, land owner and farmer James Swail began residential subdivisions on the eastern side of Decelles Avenue. In 1906, a large housing development was started in the area, called Northmount Heights, built by developer Northmount Land Company. Much of this area has been expropriated by the Université de Montréal.

Probably one of the most memorable sights you will visit is Saint Joseph's Oratory nestled in the slope of Mount Royal.

In 1904, Saint André Bessette, C.S.C., began the construction of St. Joseph, a small chapel on the slopes of Mont Royal near Notre Dame College. Soon the growing number of the congregation made it too small. In 1917 a larger church was completed that had a seating capacity of 1,000. In 1924, the construction of the basilica of Saint Joseph's Oratory was commenced; it was finally completed in 1967.
Father Paul Bellot, an architect, completed the dome of Saint Joseph's Oratory between 1937-39. The dome is the third-largest of its kind in the world after the Basilica of Our Lady of Peace of Yamoussoukro in Côte d'Ivoire and Saint Peter's Basilica in Rome.
In 1949-1951, architect Gilbert Moreau carried out alterations and improvements to the interior of Saint Joseph's Oratory, as well as to the adjacent monastery, and rearranged the sacristy in the basilica.
The basilica is dedicated to Saint Joseph, to whom Brother André credited all his reported miracles. These were mostly related to some kind of healing power, and many pilgrims (handicapped, blind, ill, etc.) poured into his Basilica, including numerous non-Catholics. On display in the basilica is a wall covered with thousands of crutches from those who came to the basilica and were purportedly healed. Pope John Paul II deemed the miracles to be authentic and beatified Brother André in 1982. In October 2010 Pope Benedict XVI canonized the saint.
A reliquary in the church museum contains Brother André's heart, which he requested as a protection for the basilica. More than 2 million visitors and pilgrims visit the Oratory every year. It is located at 3800 Queen Mary Road, at Côte-des-Neiges (near the Côte-des-Neiges metro station).
Composer Émilien Allard notably served as the church's carillonneur from 1955 to 1975. For RCA Victor he released the LP album Carols at the Carillon of Saint Joseph's Oratory for which he wrote the arrangements.

B is for Boucherville

I chose Boucherville for the letter B because right before Christmas I met a second cousin on my paternal grandfather's side that resides in the town of Boucherville about 15 minutes from Montreal on the south side of the St. Lawrence River. We now correspond regularly, exchange photographs of our family and have become great friends. Finding him was a gift.

Boucherville is one of the oldest municipalities in Québec. In 1668, Pierre Boucher began farming in the area and 4 years later received his seigneury, consisting of Îles-Percées and the adjacent islands.
Boucher secured the community against Iroquois attack by constructing a palisade. In 1843 a tragic fire destroyed almost the entire village. In 1856, Boucherville divided into 2 distinct municipalities: village and parish. In 1956, the parish lots with frontage on the St Lawrence River rejoined the village and a year later Boucherville was incorporated as a city. In 1963, the remaining territory of the municipality of the parish and the city of Boucherville merged. In 2002, Boucherville lost its municipal status when it was amalgamated into the new city of Longueuil.


Old Boucherville is the original section of the city that contains the former village and Sainte-Famille Church. The neighbourhood is located between Saint-Lawrence River, the boulevards du Fort Saint-Louis, de Montarville et de Montbrun. Many of the buildings there are officially classified as historic monuments. 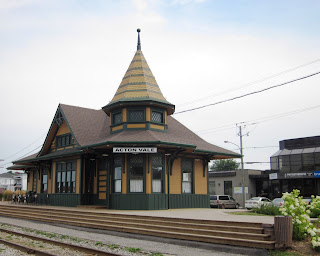 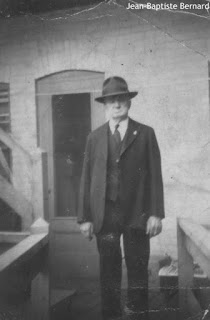 Jean Baptiste Bernard passed away in 1953, peacefully.
Posted by Linda Sullivan-Simpson at 11:22:00 AM No comments:

St. Hyacinthe (Our Lady Of The Rosary) 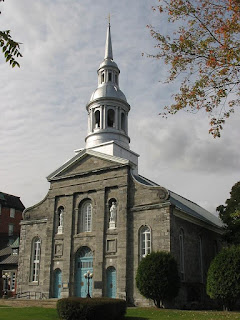 The church where all the Bernard sisters were married.

Email ThisBlogThis!Share to TwitterShare to FacebookShare to Pinterest
Labels: Churches


I've been gifted a photograph by a second cousin of 5 women who I think are the Bernard sisters. It had to have been taken between 1913 and 1937. In no particular order they might be Amelia, Evelina, Adrienna, Rita, and Anita. There was a 6th Bernard sister, Delia, who died in 1917. I know the second women from the left is Evelina (Bernard) Mailhot.