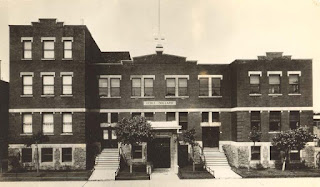 At 5941-5945 rue Saint-Urbain stood the first Lambert-Closse School from 1910 to the end of the 1960s. Until 1931, it was called École Dollard. It was demolished following its expropriation in 1968 by the city of Montreal for the construction of the tunnel allowing the connection of Clark Street to Saint-Urbain Street under the railway tracks.

In 1910, the Saint-Georges parish factory, which covers an area between the Canadian Pacific Railway to the north, Saint-Viateur Street to the south, Hutchison Street to the west and Henri-Julien Street to the west. is, open a school of boys, the Dollard School. The parish already has a girls' school, the Académie Saint-Georges. Plans for the new school are due to architects Joseph-Elgide-Césaire Daoust and Louis-Zephirin Gauthier, who specialized in the construction of religious and school buildings. The factory entrusted them with the drawing up of the plans of all the buildings of the parish: the Saint-Georges Academy and its chapel (1909) at the corner of the Bernard and Waverly streets, the Saint-Georges church (1913) at the corner of Bernard and Saint-Urbain streets and the patronage building Jean-Léon Le Prevost (Patro Le Prévost, 1913), St. Dominique Street. All these buildings have disappeared today.

Until 1959, the school was run by the Marist Brothers, a congregation from France who arrived in Quebec in 1885. It was named École Dollard to respond to the wishes of Archbishop Paul Bruchési of Montreal, who wished to see the commission Catholic School of Montreal commemorate the heroism that Dollard des Ormeaux would have demonstrated during the battle of Long-Sault, by baptizing one of his schools with his name. In 1931, the school was renamed École Lambert-Closse by the Commission des écoles catholiques de Montréal.

The Dollard School is what is then called a model school of commercial instruction. The school's enrollment is growing rapidly, in line with the population growth in Saint-Georges parish. At its opening, it has 120 students for 3 classes and reached 315 students in 1916 for 8 classes. In 1918, the school was enlarged: one floor was added to the north wing, where the brothers' quarters were, to accommodate an extra class. In 1949, the school loses the complementary level (7th and 8th years)

The Marist Brothers intend to provide education that is at once moral, intellectual and physical. The school has a well-known choir of sports teams, including a hockey team (the school sets up an ice rink in the winter) and religious societies such as the Phalange of the Sanctuary's Children. Cadets of the Sacred Heart.

On September 27, 1968, the school building and the land it occupied were expropriated by the city of Montreal to connect Clark Street, north of the roadway right of the Canadian Pacific Railway at Saint-Urbain Street, south of Van Horne Avenue, a connection that is part of the larger project to build the Rosemont-Van Horne viaduct. A new Lambert-Closse school is built on the grounds of the factory occupied by the Académie Saint-Georges and the Saint-Georges church and its presbytery.

Posted by Linda Sullivan-Simpson at 9:11:00 AM No comments:

Founded in 1822, at the British and Canadian School one teacher would oversee hundreds of students, with the older students instructing the younger ones.

Modern day teachers may not approve, but it was an effective way to teach reading, writing and arithmetic to working-class children.

The rebellions of 1837-38 ended that experiment. French parents pulled their students out of the school and it was eventually absorbed by the Protestant School Board of Greater Montreal.
Posted by Linda Sullivan-Simpson at 8:44:00 AM No comments:

Thomas D'Arcy Etienne Hughes McGee, (13 April 1825 – 7 April 1868) was an Irish-Canadian politician, Catholic spokesman, journalist, poet, and a Father of Canadian Confederation. The young McGee was a Catholic Irishman who hated the British rule of Ireland, and worked for a peasant revolution to overthrow British rule and secure Irish independence. He escaped arrest and fled to the United States in 1848, where he reversed his political beliefs. He became disgusted with American republicanism and democracy, and became intensely conservative in his politics and in his religious support for the Pope.

He moved to Canada in 1857 and worked hard to convince the Irish Catholics to cooperate with the Protestant British in forming a Confederation that would make for a strong Canada in close alliance with Britain. His fervor for Confederation garnered him the title: 'Canada's first nationalist'. He fought the Fenians in Canada, who were Irish Catholics who hated the British and resembled his younger self politically. McGee succeeded in helping create the Canadian Confederation in 1867, but was assassinated by Fenian Elements in 1868.

Posted by Linda Sullivan-Simpson at 7:07:00 AM No comments:

The British and Canadian School

The British and Canadian School was founded in 1822 by a group of Montrealers with widely different political views: Horatio Gates, Louis-Joseph Papineau, John Frothingham, William Lunn, Alexander Ferguson, François-Antoine Larocque and Olivier Berthelet. These men were united in their commitment to the moral improvement of working people: the school was intended to serve “the children of all labouring people or mechanics” (that is, artisanal workers). The governors also wanted to provide an alternative to the schools run by Catholic religious orders and the very Anglican Royal Institution. The British and Canadian School was to be non-denominational.

It would also be a “monitorial school,” based on a concept imported from Britain wherein one master taught the more advanced pupils (the “monitors”) who in turn taught the younger ones. Monitors were given special instruction outside the usual hours of 9:00 to 12:00 and 2:00 to 5:00 in subjects such as English Grammar and Geography; during regular hours, monitors taught reading, writing, arithmetic and needlework, and the master supervised. By this method, it was claimed, “one master can teach 1000 as well as 100.” The monitorial system was suitable for girls as well as boys, and at most times at least a third of the pupils were girls.

After a few years in rented accommodation, the governors secured enough government grants and public subscriptions to build a permanent school, designed by architect James O’Donnell (of Notre Dame Church fame) and built by master mason John Redpath (later of sugar fame). Land was purchased at the corner of Lagauchetière and Côté streets, in what was then on the outskirts of town. The cornerstone was laid in October 1826 and the school opened the following September. It appears to have functioned smoothly until after the 1837-38 rebellions, when it lost a lot of Catholic pupils. Even so, references to it in the 1850s and 60s suggest it was one of the best schools in the city. In 1866, Montreal’s Protestant school board acquired it and expanded it by adding a third story.

Despite being under the Protestant board, the school remained non-denominational, though it had long since abandoned the monitorial system. Many liberal or anti-clerical Catholic families sent their children there in the 1870s, including Charles McKiernan, aka “Joe Beef.” The school also attracted a fair number of Jewish children, who lived nearby – the synagogue was just around the corner. The school board paid the salary of a Hebrew teacher for the school, a service in return for the school taxes it received from Jewish property owners. This was the beginning of a long relationship between the Jewish community and the Protestant school system.

The British and Canadian School was finally closed in 1896 and the pupils transferred to a more modern building. The school was eventually used as a noodle factory. Today, it stands at the heart of Montreal’s Chinatown, probably the oldest surviving purpose-built school in the city.