I am Sentinel for Robert Lee Garrett - Memorial Day - 2021 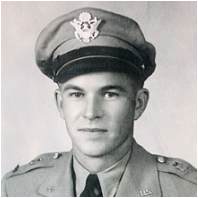 Second Lieutenant Robert Lee Garret was born on Wednesday 3 April 1918. He was the son of Chester and Hazel Garrett. The family called him Bobby, and he had a brother named John. They lived on Rural Route #3 in Norman, Oklahoma. Bobby entered the US Army as an enlisted man on 2 December 1941. He later went to Officer's Training School and was commissioned as a Second Lieutenant on 28 May 1943. He became a pilot in the United States Army Air Force, and was assigned to the 785th Bomber Squadron of the 466 Bomber Group of the Eighth Air Force.

On Thursday 23 March 1944, Lt. Garrett was piloting a B-24 Liberator nicknamed the Shoo Shoo Baby when it departed from its base at Attlebridge on a mission to bomb an airfield in Western Germany. It was the squadron's second mission, and the weather conditions were unfavorable. En route to its target, the relatively inexperienced squadron flying in bad weather suffered a horrific accident. High in the skies above the Province of Overijssel in the Netherlands, the Shoo Shoo Baby collided in mid-air with the Dark Rhapsody, another B-24 from the same squadron. The Shoo Shoo Baby crashed into a small lake called the Boschwijde (Boswiede in the local dialect) about three miles east of Vollenhove. All nine of the crewmembers of the Dark Rhapsody and six of the crewmembers of the Shoo Shoo Baby were killed in the collision and crash.

Wicher Rozeboom and Harm Jordens, two Dutch civilians who lived near the lake, heard the crash and set out in a rowboat to search for survivors. They found Bobby Garrett, Billy Boyer and Howard King who were still alive and floating in the water. Rozeboom and Jordens took the three aviators to the home of Jannes Ziel. A few days later, they were brought to the Dutch Resistance group led by Peter van den Hurk.

The Dutch Resistance brought the three Americans to Belgium, and handed them off to the "Comet Line. The Comet Line was a network of over 1,000 civilians who guided downed Allied airmen south through Belgium and France, across the Pyrenees to neutral Spain, from which they could return to England. The three thus headed south on the way back to England. It was a dangerous trek. The Germans captured Boyer along the way and he spent the rest of the war in a POW camp. However, Garrett and King continued.

By May of 1944, Garrett had made it to Liège, where he stayed with a family for three weeks. While there, he wrote a long letter to his mother describing how wonderful everyone in the Resistance had been to him, and how grateful he was to the people who were sheltering him. Of course, with the war in full swing, the letter could not be delivered, and his mother only received the letter after the war.

In June, Garrett was brought to Queue-du-Bois to stay in the home of Joseph Bourdouxhe. Bourdouxhe was a sixty-one year old farmer who lived on the rue de la Paix 4 with his son Jean and Jean’s wife. By the time Garrett arrived at the Bourdouxhe family home, the Allies had invaded Normandy and it was clear that the Allied armies were on their way to Belgium. The Comet Line reasoned that it made more sense for downed airmen to stay put and wait for the Allied armies to reach Belgium than it did to make the dangerous journey to Spain. So, Garrett remained at the Bourdouxhe family home for the summer, and friendship bloomed. The Bourdouxhes came to consider Bobby as one of the family, and he lived as a member of the family.

The Allies liberated Brussels on 4 September 1944, and they were on the way to Queue-du-Bois. Although the Nazi’s began to retreat from the area around Liège, they were still occupying Queue-du-Bois. At 8.00 am on Thursday 7 September, Bobby Garrett was working with Madame Bourdouxhe in the orchard on the family farm, helping with the family chores. He was dressed in civilian clothes, and by all outward appearances, looked like a simple Belgian civilian farmer collecting fruit. A retreating German vehicle with SS on board drove by on the road next to the orchard. One of the SS saw the young man working on the trees. He took aim at Bobby Garrett, and shot him dead, obviously believing Bobby to be a Belgian civilian. It was a simple, cold-blooded murder, like so many others that the SS perpetrated against the Belgian civilian population during the war.

Immediately after the war was over in Europe, the Bourdouxhe family began corresponding with the Garrett family, and they sent Bobbys personal effects to his parents. Bobby's brother John C. Garrett was himself a Sergeant in the US Army serving in Asia. In July of 1945, John wrote a letter to the Bourdouxhe family to thank them for what they had done for his brother. At the time, the war in Europe was over, but the war in Asia was still underway. John wrote:

I’m proud that you considered my brother one of your family. I know my brother gave his life gladly to restore peace to you and all of us and I’m glad it wasn’t in vain. I only wish as you that he could have seen the end and the joy in the faces of the millions of people that have suffered so much in these troubled times. May the war end here soon so that we can be with our wives and children once more…. God bless all of you and it would make me very proud if you would consider myself as part of your family.

In September of 1945, his mother Hazel wrote this in a letter to the Bourdouxhe family:

Last year, during the anxious months of waiting each nite [sic.] when I prayed for his safety, I prayed too for the protection and guidance of those who were taking care of him; for I always believed he was alive and with friends. Now I know that some of my prayers were answered…. I am so very grateful to all of you who helped care for Bobby, who made those months a little happier for him. I am grateful also to your city and country.

Unbeknownst to the Garrett family, the U.S. Army disinterred Bobby and moved him to the Netherlands American Cemetery in Margraten on 4 March 1946. Jean Bourdouxhe wrote a letter breaking the news to Bobby's father, who was later officially notified of the transfer by the War Department. Bobby's removal from the Bourdouxhe family tomb deeply distressed Chester Garrett, who "protested as strongly as possible to the Army about his son's disinterment that he did not authorize. He began a letter campaign to have his son's remains returned to Queue-du-Bois to rest in peace among Bobby's Belgian friends.

The village of Queue-du-Bois supported this request. The burgomaster wrote to the United State Embassy in Belgium, offering to set aside a place of honor for Bobby in the veteran’s section of the village cemetery. The village also offered to assume all expenses for the reburial as well as the expenses for the upkeep of the grave.

In June of 1948, the Department of the Army agreed to comply with the wishes of Bobby's family. On 29 March 1949, Bobby was disinterred from the cemetery at Margraten and returned to Queue-du-Bois. He was laid to rest with honors by the Belgian people who had sheltered him, befriended him, and made him part of their family.

Jerome Sheridan wrote the story above, drawing on the following sources:
The IDPF of Second Lieutenant Robert Lee Garrett.
Teunis Schuurman, http://www.teunispats.net/jack-edward-gibbs.htm(link is external).
Mr. Schuurman provided the information about Garrett's rescue from the Boschwijde and the people who helped him in the Netherlands, as well as the photo of Robert Garrett.
Various histories of the Eighth Air Force
Posted by Linda Sullivan-Simpson at 4:04:00 PM