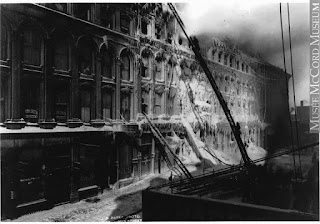 During the night of 22 January 1888, a terrible fire destroyed an imposing stone building on Little St. James Street, east of Place d’Armes in Montréal. The five-storey building with a façade of 165 feet was home to different companies, including several American business firms. The New York Times hastened to report the event, characterising the drama as “one of the worst fires that had visited Montréal for many years.”

According to the article, the fire began shortly after midnight on the second floor of the building; an extremely cold night and westerly winds soon caused the water hoses to freeze, while the “firemen were quickly transformed into walking blocks of ice.” Despite the efforts of the fire brigade, the flames spread rapidly through the stairwells and explosions were heard repeatedly. The equipment inadequate, the cold intense, ”the men and horses exhausted,” the only solution was to let the fire to die out of its own accord. In the early hours of the morning, it was reported “the block is to-day covered by a solid sheet of ice.”

The photograph by Notman & Son was no doubt taken during the morning of 22 January 1888. The photographer unites the key elements of the event and succeeds, through a discerning choice of perspective, light and framing, in capturing the drama and conveying the spectacular effect and striking transformation of the building encased in ice. 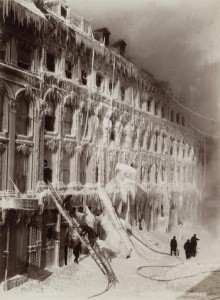 Posted by Linda Sullivan-Simpson at 7:57:00 AM No comments:

Arrival of the Steamboat Valleyfied at St. Helen’s Island

Posted by Linda Sullivan-Simpson at 8:47:00 AM No comments:

Posted by Linda Sullivan-Simpson at 9:04:00 AM No comments: