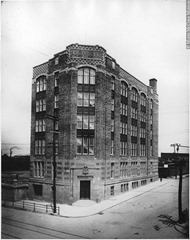 Bovril Building art deco building located on the corner of Van Horne and Park Ave was built in 1921-22 by Montreal architect James Cecil McDougall for Food Specialists of Canada Limited, the manufacturers of Bovril in Canada.

In the mid 1800s, John Lawson Johnston, a Scottish butcher, having an interest in food science and preserving, experimented with heating beef trimmings, and came up with a concentrated beef stock, which had a long shelf-life. It became a favorite nourishing beef beverage for Edinburgh’s poor, as it would also have restorative and medicinal values.

Johnston emigrated to Montreal in 1863, where he set up a factory, where he developed “Johnston’s Fluid Beef”. In 1871 he went back and married Elizabeth Elliott Lawson in Edinburgh, Scotland. The couple lived there until 1875. In 1874 Johnston won a contract to produce preserved beef products for the French army of Emperor Napoleon III during the Franco-Prussian War. According to Bovril’s official history, around a million tonnes of beef product were produced, in the wake of it losing the war that year to the Prussians. In 1875, John, his wife and their first three children moved back to Canada and settled in Quebec City. There their last two children were born. He kept working on his liquid beef and re-invented it as a concentrate, which he made from beef parts leftover from the French government order of tinned beef. In 1879, John moved the business from Quebec City to Montreal. When, in 1884 his factory was destroyed by fire, he decided to move back to Europe, where he set up business in London selling his concentrate to grocery stores and pubs. In 1887 the name “Bovril” was registered, and a new brown-glass bottle was introduced. In 1895 John bought Kingswood House in Sydenham, London, and enlarged it by adding a wing and a large entrance. The Victorian mansion became known as “Bovril Castle”. The Bovril empire was sold in 1896 for £2 million. John Lawson Johnston died in 1900, but his product has survived to this day.

Food Specialists of Canada Ltd. occupied the Bovril building to 1948, when they moved and sold the building to British based Brooke Bond & Co, as a packaging plant for the Red Rose Tea factory established by Theodore Harding Estabrooks in 1894 in Saint John, New Brunswick. After Red Rose moved out in 1962, the Bovril building was home to several small businesses, mainly clothing shops. It has also been a low-rent place for artists such as painters, musicians, mimes and other various struggling artists.

Today, the building, owned by the Skver Yeshivah, houses a Hasidic Jewish primary school, library and daycare, and a non-profit artist’s cooperative with studios on the upper floors, each with their own entrance. The Bovril name has been removed, but the 1920’s industrial architecture remained intact.

©2018 The past Whispers
All Rights Reserved