Nova Scotia’s final farewell to the RDV 2017 Tall Ships Regatta will take place in Annapolis Royal on Wednesday, August 16. Eight Tall Ships (including Bluenose II, Bowdoin, Lord Nelson, Picton Castle, St. Lawrence II, When and If, HMCS Oriole, and Wylde Swan) are scheduled to leave Digby in the afternoon of August 16 for an arrival as close to the town of Annapolis Royal as weather conditions allow by between 5:00 pm and 6:00 pm. Following a day full of musical performances, farmers and traders markets, and food demonstrations downtown, the evening's celebrations will wrap up with fireworks at the Annapolis Royal Wharf and a candlelight graveyard tour at 9:15 pm. 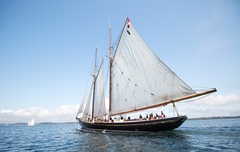 RDV 2017 Tall Ships Regatta participants have visited 11 ports throughout Nova Scotia this summer, and at each and every port the intrepid seafarers were welcomed like no other province is able to, with warmth, excitement, enthusiasm and a genuine understanding of the significance of sail and its place in our history.