©2017 The Past Whispers
All Rights Reserved
Posted by Linda Sullivan-Simpson at 7:02:00 AM No comments:

The building which housed the Gayety Theatre, was designed by the architects firm of Ross and MacFarlane, for the Canadian Amusement Company. The building with its balcony and gallery gallery, featured seating for 1600 guests. It became one of Montreal’s first landmarks of public entertainment. Opening its doors on in 1912, the Gayety offered American Vaudeville, a popular form of entertainment at the time of the Great Depression. It saw packed crowds of not only men but women and children. Vaudeville disappeared around 1929 and the theatre became a movie house for a number of years, before becoming one of the most popular cabarets iin Montreal.

During Prohibition in the USA, Montreal businessman Samuel Bronfman, founder of Distillers Corporation Limited was the importer of Seagram’s Canadian Whiskey, and Montreal became the destination for Americans looking for a drink and other pleasures. Burlesque houses, variety theatres and jazz clubs thrived during this era. Gambling and prostitution, unrivaled in North America, earned Montreal the nickname “Sin City”. The Gayety Theatre featured burlesque artists like Gypsy Rose and exotic dancer Lily St-Cyr, considered the “Queen of Strippers” in the 1940s and 1950s. She often performed topless, and was one of Montreal’s main cultural attractions, taking in an average of $5000 a week, an amount unheard of at the time. Her performances included erotic versions of classical stories, oriental fantasies of harems and sex slaves, and scenarios set in bathrooms and bedrooms. She performed her last show in March 1957. By the late 1940s, the Gayety Theatre along with other clubs of Montreal’s red light district, became associated with organized crime and corruption.

In 1950, lawyer (and later Montreal mayor) Jean Drapeau and former police chief and lawyer Pax Plante along with other political and religious individuals formed “La Comite de Moralite Publique”, a morality squad that promised to rid Montreal of gambling, prostitution and corruption, much of which was centered around the red light district. They imposed harsh curfews and closing times, which caused many of the cabarets to shut down, including the Gayety Theatre which closed its doors in 1953. From 1953 to 1956, it was known as Radio City.

In 1956, Canadian author, playwright, actor, director, and producer Gratien Gélinas, who is considered one of the founders of modern Canadian theatre and film. bought the theater. It became the Comédie Canadienne, a French theater that featured shows with performers like Gilles Vigneault, Monique Leyrac, Claude Léveillée, Jacques Brel, Barbara and Serge Reggiani. In 1972, the Théâtre du Nouveau Monde, bought the building and is the current owner. The TNM is a theatre company and venue, featuring national and international classic plays.

The building is located at 84 rue Sainte-Catherine West in Montreal.

Posted by Linda Sullivan-Simpson at 7:17:00 AM No comments:

Posted by Linda Sullivan-Simpson at 8:52:00 AM No comments: 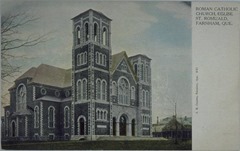 Posted by Linda Sullivan-Simpson at 7:06:00 PM No comments:

More than 40 Tall Ships will be sailing Canadian waters to honour the 150th anniversary of the Canadian Confederation in 2017.

They are scheduled to stop at host ports in Ontario, Québec and the Maritimes, giving thousands of people the opportunity to admire the majestic beauty of these cathedrals of the seas.

(c)2017 The Past Whispers
All Rights Reserved

Posted by Linda Sullivan-Simpson at 7:40:00 AM No comments: