Guy St., just north of Ste-Catherine, where Concordia University’s engineering, computer science and visual arts complex stands today. Built as Her Majesty's Theatre in 1897-98 during the reign of Queen Victoria, the name changed to "His" in 1901 under a new king of England, and the name would change once again in 1952 with the accession of Queen Elizabeth II. A stage theatre with vaudeville, opera, ballet and theatre and that also showed movies at least as early as 1918. Sarah Bernhardt performed here, as did Lon Chaney. The theatre was demolished in 1963.

Posted by Linda Sullivan-Simpson at 5:46:00 AM No comments:

The Theaters of Ste. Catherine Street

In the early 20th century, Ste-Catherine St. was abuzz with cinemas, concert halls and theatres. Today, most of them have vanished, and many of the original buildings have been razed and replaced with not so much as a plaque to mark this vanished era. From west to east, here are some of the theatres that once lined the street. 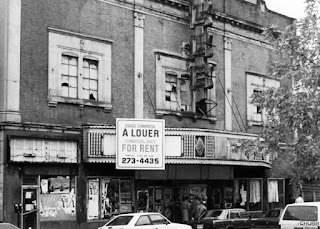 The theater, designed by Cajetan L. Dufort (full name Louis-Joseph Cajetan Dufort, also the architect of the Corona Theater), was built in 1929 - just five years after the nearby Montreal Forum - in a then -bustling part of downtown Montreal. Its interior was designed by Emmanuel Briffa.

The Seville was a single-screen, 1148 seat theater and one of only 15 atmospheric theaters ever built in Canada. Its exterior had a Spanish theme (hence the name Seville) with its ceiling painted to resemble a night sky with sparkling stars. There was an additional mechanism in place that could be turned on to give the appearance of clouds moving across the sky. The theater was built with shops in the front, including an ice cream parlor on the east side and a drugstore on the west. 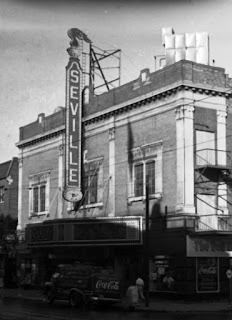 Opened in 1929 at Ste-Catherine and Chomedey Sts. One of the United Amusement chain’s neighbourhood double-bill movie houses.

Interior decorated by Emmanuel Briffa. Became a concert hall in the 1940s, with performers including Tony Bennett, Nat “King” Cole and Harry Belafonte.

Operated as a repertory theatre for a decade before its developer-owner shut it down in 1984. It was left to fall into ruin. Its carcass was razed to make way for condos in 2010.

Posted by Linda Sullivan-Simpson at 6:08:00 AM No comments:

All vessels taking part in Race 3 of the awesome Rendez-Vous 2017 Tall Ships Regatta have now left Bermuda. Following a delayed race start, the fleet crossed the start line within the 48-hour window and the impressive Tall Ships are now making their way through the beautiful warm waters of the Gulf Stream, toward Boston.

Here are the latest placings from Race 3 from Bermuda to Boston on Corrected Time:

Note: Positions and placings are correct at time of writing. Check out YB Satellite Tracking for the latest information.

-courtesy Sail On Board

Posted by Linda Sullivan-Simpson at 6:26:00 AM No comments: