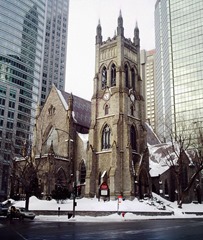 The original St. George's Church opened on June 30, 1843, and was on Notre-Dame Street (then Saint Joseph Street) and Saint David's Lane, just outside the city of Montreal's walls. It was the second Anglican congregation in Montreal and was built to accommodate the overflow of parishioners from Christ Church Cathedral. An organ built by Samuel Russell Warren was installed later that year.

The congregation of St. George's continued to grow as the city expanded to the west. A plot of land at the corner of Peel Street and De la Gauchetière Street was chosen as the site of the current church. This piece of land had been a Jewish cemetery from 1775 to 1854. St. George's was designed by Montreal architect William Tutin Thomas, constructed in 1869, and opened its doors on October 9, 1870. The only furnishing retained from the old church was the pulpit. The old church would serve as a factory for organ-maker Samuel Russell Warren.

The parishioners of St. Jude Church (corner of Coursol Street and Vinet Street in Little Burgundy) and Church of the Advent (corner De Maisonneuve Boulevard and Wood Avenue in Westmount) joined those of St. George's following their churches' closures.

Designated a National Historic site in Canada in 1990.