The second growth spurt of Mile End coincided with the introduction of electric tramway service in 1893; the area can be considered an example of a streetcar suburb. The agricultural and industrial exhibition grounds at the southwest of the village, near Mount Royal, were subdivided in 1899 for housing. The village became a town in 1895 and changed its name to simply Saint-Louis. Apart from a tiny street located just outside the town's northwestern limit, and (for its remaining years) the railway station, the name Mile End passed out of the official toponymy for close to a century, coming back into use as a municipal electoral district only in 1982.

The town of Saint-Louis built in 1905 a magnificent town hall on the northwest corner of Saint-Laurent and what is now Laurier Avenue; the building still serves as a fire hall and firefighters' museum. The town was annexed by the expanding city of Montreal on 29 May 1909, taking effect as of 1 January 1910, and became Laurier Ward (quartier Laurier). Population growth had been explosive: in 1891, the village had 3537 residents; in 1911, after annexation, the ward's population was about 37,000. 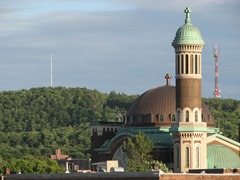 Perhaps the most recognizable architectural symbol of Mile End is the Church of St. Michael the Archangel of 1914-5, on Saint-Viateur Street at the corner of Saint-Urbain. The church, designed by Aristide Beaugrand-Champagne, was built for an Irish Catholic community, as expressed by omnipresent shamrock motifs; yet the overall style of the building is based on Byzantine rather than Western architectural traditions. Even more striking, the church has a slender tower that resembles a minaret. The building has been shared since 1964 with the Polish Catholic mission of St. Anthony of Padua, which officially merged with the parish of St. Michael in 1969 to form the current parish of St. Michael's and St. Anthony's; masses are celebrated in Polish and in English.