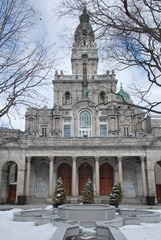 Nineteenth-century maps and other documents show the name Mile End as the crossroads at Saint-Laurent Road (now Boulevard) and what is now Mont-Royal Avenue. Originally, this road was Côte Sainte-Catherine Road (heading west) and Tanneries Road (heading east). It is probable that the name Mile End was inspired by the East London suburb of the same name.

Contrary to popular belief, the place is not precisely a mile away from any official marker. It is, however, a mile north along Saint-Laurent from Sherbrooke Street, which in the early 19th century marked the boundary between the urban area and open countryside. (Several decades later, the Mile End train station near Bernard Street was situated coincidentally one more mile north along Saint-Laurent from the original crossroads.)

As early as 1810, there was a Mile End Hotel and tavern, operated by Stanley Bagg, an American-born entrepreneur and father of the wealthy landowner Stanley Clark Bagg. The earliest known published references to Mile End are advertisements placed by Stanley Bagg, in both English and French, in The Gazette during the summer of 1815. He announced in July: "Farm for sale at St. Catherine [i.e., Outremont], near Mile End Tavern, about two miles from town...". On 7 August, he inserted the following:

STRAYED or STOLEN from the Pasture of Stanley Bagg, Mile End Tavern, on or about the end of June last, a Bay HORSE about ten years old, white face, and some white about the feet. Any person who will give information where the Thief or Horse may be found shall receive a reward of TEN DOLLARS and all reasonable charges paid. STANLEY BAGG. Montreal, Mile End, August 4, 1815.

The road variously known as Chemin des Tanneries (Tannery Road), Chemin des Carrières (Quarry Road), or Chemin de la Côte-Saint-Louis led to a tannery and to limestone quarries used for the construction of much of Montreal's architecture. The village of Côte Saint-Louis (incorporated 1846) sprung up near the quarries, its houses clustered east of the Mile End district around the present-day intersection of Berri Street and Laurier Avenue. It was to serve this village that a chapel of the Infant Jesus was established in 1848 near Saint Lawrence Road, on land donated by Pierre Beaubien. In 1857-8, the chapel was replaced by the church of Saint Enfant Jésus du Mile End. The church, made even more impressive by a new façade in 1901-3, was the first important building in what would become Mile End.