Mile End – The Coming of the Railway 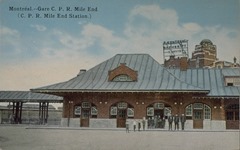 The transcontinental railway gave Mile End its first growth spurt and separate identity. In 1876, the Quebec, Montreal, Ottawa and Occidental Railway – a project vigorously promoted by Antoine Labelle and Louis Beaubien – came slicing through the area on its way from east-end Montreal to Sainte-Thérèse, Lachute, and Ottawa. This railway was bought in 1882 by the Canadian Pacific, and it was by this route that the first trains departed for the Prairies in 1885 and for Port Moody, British Columbia in June 1886 (extending to Vancouver in 1887). The first Mile End station building was erected in 1878 on the east side of Saint-Laurent Road, near what is now the intersection of Bernard Street. (A much larger station was built in 1911; it closed in 1931, when service was moved to the new Park Avenue Station (Jean-Talon), and was demolished in 1970 to make way for the Rosemont–Van Horne viaduct.)

Also in 1878, the village of Saint-Louis-du-Mile-End was incorporated, population 1319. Its territory consisted of the western third of Côte Saint-Louis: bounded on the west by the limit of Outremont (generally along Hutchison Street), on the south by what is now Mont-Royal Avenue, and on the east by a line running mostly just east of the current Henri-Julien Avenue. The northern border was north of present-day De Castelnau Street or just south of Jarry Park.

(2017) Linda Sullivan – Simpson
The Past Whispers
All Rights Reserved