Several models of buses were tested, including the famous “Atwater Street Monster” built by the American company Versare. In 1931, a 35-vehicle garage was built on Côté Street, near the company’s head office. The network also grew in 1931 with service to Longueuil and St. Helen’s Island via the new Havre Bridge (Jacques-Cartier Bridge). The bus division now had 155 buses carrying over 20 million passengers yearly. Beginning in 1936, the bus replaced the tramway on certain routes and new garages were opened in Montreal East and on Mont-Royal Avenue. The following decade saw the opening of the Bellechasse (1941), Charlevoix (1944) and Villeray (1947) garages. 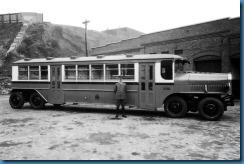 Seven trolleybuses built by the English company AEC were put into service on Beaubien Street in Montreal on March 29, 1937. It was the first modern trolleybus service in Canada, after unsuccessful tests in Toronto and Windsor, Ontario. Ten years later, the MTC decided to continue the experiment and acquired 40 more trolleybuses. These vehicles, which were built by the Canadian Car company, were put into service on Beaubien Street and, starting in 1949, on Amherst Street and Christophe-Colomb Avenue. The MTC received another 40 trolleybuses in 1949 and decided to deploy them on Bélanger Street. The number of trolleybuses increased from 80 to 105 in 1952, but then remained unchanged until this means of transportation was abandoned in 1966. 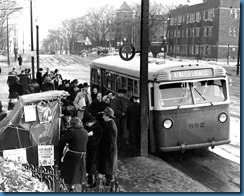