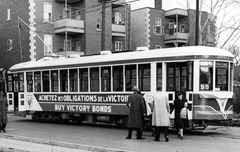 After dominating the city’s landscape for years, tramways now faced competition from buses, which were introduced in Montreal in 1919 and had their own division as of 1925. The early rickety buses were quickly replaced by quality vehicles which, although they could not carry as many passengers as the tramways, could be deployed rapidly and less expensively as the city evolved. After several smaller-scale tests, the first major replacement of a tramway by a bus occurred in 1936 in the city’s east end, on Notre-Dame Street. The bus was no longer a simple complement to the tramway but its direct competitor.

World War II breathed new life into the tramways. The Transit Controller appointed by the federal government in 1941 required the MTC to limit its use of gasoline and tires. The company was thus forced to return its old tramways to service and purchase a few more second-hand. In 1944, it also put into service the PCC tramways, the last tramway model used in Montreal, of which it received only 18. So it was an aging fleet of tramways that served Montreal through the Second World War and made it possible to achieve a peak ridership in 1947 of 398,349,773 passengers transported during the year.