The municipalization of public transit in 1951 led to all of the tramways being replaced by buses. The new Montreal Transportation Commission (MTC) acquired 1,300 buses, including a thousand of the Canadian Car-Brill model. The Commission set about transforming the old tramway sheds and expanded its shops at the Crémazie Plant, built in 1948. Finally, it opened the Namur (1954), Frontenac (1956) and Saint-Michel (1957) garages, as well as the Atwater and Frontenac terminuses (1956). The first express bus service was launched on Saint-Denis Street in 1955 and a completely new model of bus, the New Look from General Motors, was put into service in 1959. 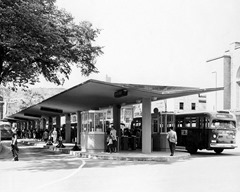 The MTC’s service territory grew with the addition of new bus routes in Saint-Léonard (1963), Rivière-des-Prairies (1966), Jacques-Cartier (city subsequently merged with Longueuil in 1966) and Anjou (1966). Unveiled in 1962, the Commission’s new modern bus shelter was installed at certain key locations in the network. In 1965, fare zones were abolished to allow for fare integration between the buses and métro. The métro’s launch in October 1966 had a major impact on the bus network: dozens of routes were created, changed or eliminated. New magnetic tickets and new connections were also introduced. 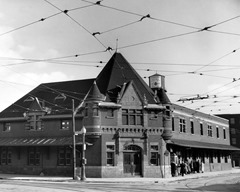