The Society of the Priests of Saint-Sulpice built this building from 1684 to 1687 and enlarged it at the beginning of the eighteenth century. This is his second seminar in Montreal. The first, built in 1657, had a main façade towards the river and overlooked Saint-Paul Street. After the construction of the old parish church, Rue Notre-Dame, inaugurated in 1683, the Sulpicians decided to leave the market place and choose to settle on a vacant lot next to the church they serve . Attributed to the superior of the seminary of Montreal, François Dollier de Casson, the building must mainly house the priests of Saint-Sulpice. In addition to their role as educators and missionaries, the Sulpicians were responsible for the parish of Notre-Dame and, from 1663 until the 19th century, they held the seigneury of the island of Montreal. The residence of the Sulpicians is therefore both a presbytery, a seigniorial manor and a seminary where some fifteen priests receive a good part of their sacerdotal training during the French Regime.

Originally, the building consists of only a long body of building parallel to the street. It then has two stone floors, including the ground floor (rather than three as is currently the case) and it is capped with a broken roof at the Mansart - we do not know when it will be modified to the benefit of The current configuration. Two wings, perhaps projected from the beginning, were added around 1710 - between the elaboration of the plan of Jacques Levasseur of Nere in 1704 and that of Gédéon of Catalonia in 1713. Other modifications were added, Portal in 1740. The stone wall that separates the courtyard from the street may be built at the end of the 18th century - a map of the city elaborated by Louis Guy in 1795 clearly shows its presence. 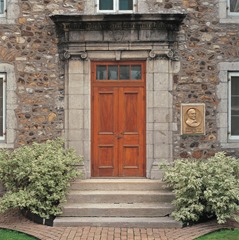 The Conquest of New France had serious consequences for the Sulpicians of Montreal, whose future was threatened. The Compagnie des Prêtres de Saint-Sulpice, whose mother-house is in Paris, possesses Canadian property. She handed them over to the priests of the Montreal seminary in February 1764, but this transfer was unofficial and gave rise to thorny questions about the legal status of the seminary. Things were not clarified until 1840 when the British colonial government recognized the Ecclesiastics of the Saint-Sulpice Seminary of Montreal as a legally constituted body - it was later changed to "The Priests of Saint Sulpice of Montreal ".

In 1840, too, the Sulpicians, in agreement with the bishop, founded the Grand Seminary of Montreal for the complete formation of the priests. Their role as ecclesiastical trainers is thus consolidated while that of lords is on the verge of disappearing. Beginning in 1848, the Sulpicians embarked on a vast project to rebuild their building on Notre-Dame Street in order to reunite their residence and the new major seminary. Only the left-hand part of the project is realized, which leads to the demolition of one of the two wings of the 18th century.

The main facade changes little afterwards, except in particular a plaster imitating the cut stone, which covers the facade for a certain time and then disappears. In the back, a long two-storey brick wing (including the ground floor) was built in 1907-1908. Various renovations take place in the 20th century, both inside and outside the seminary. In 1985, the building and the entire property were classified as a monument and historic site under the Quebec Cultural Property Act. After several studies, the most important restoration campaign in the history of the building was launched in 2005 and continues in 2011. In the meantime, the building's primary function, the residence of the Sulpicians, remains the same , But the priests who live there at the beginning of the twenty-first century are mostly retired.