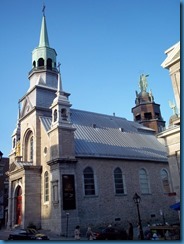 St. Marguerite Bourgeoys, the first teacher in the colony of Ville-Marie and the founder of the Congregation of Notre Dame, rallied the colonists to build a chapel in 1655. In 1673, returning from France, Bourgeoys brought a wooden image of Our Lady of Good Help; the stone church was completed in 1678. It burned in 1754, the reliquary and statue being rescued.

After Montreal was conquered by British forces during the French and Indian War, the church was attended by Irish and Scottish troops and families, and saw fundraising to build Saint Patrick's Church, Montreal's first anglophone Catholic parish.

In the 19th century, the chapel came to be a pilgrimage site for the sailors who arrived in the Old Port of Montreal; they would make offerings to the Virgin in gratitude for her "good help" for safe sea voyages. In 1849, Mgr. Ignace Bourget, Bishop of Montreal, gave the chapel a statue of the Virgin as Star of the Sea, which was placed atop the church overlooking the harbour. Emphasizing the connection of the chapel and the port, the chapel is often called the Sailors' Church.

The chapel now also houses the Marguerite Bourgeoys Museum, dedicated to the life of St. Marguerite Bourgeoys and to the early history of Montreal and the chapel site. Below the chapel, the crypt is being excavated as an archeological site, which visitors can see. First Nations and French colonial artifacts have been discovered, along with the foundations of the first chapel and the fortifications of the colony. The church's prominent spire can also be climbed, offering views of the Old Port and Saint Lawrence River. In 2005, Marguerite Bourgeoys's mortal remains were brought back to the church, where she now lies in the sanctuary.

The church is located at 400 Saint Paul Street East at Bonsecours Street, just north of the Bonsecours Market in the borough of Ville-Marie (Champ-de-Mars metro station).