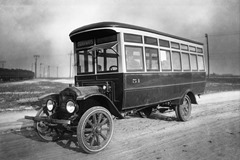 The first buses appeared in America and Europe at the beginning of the 20th century. Initially, the Montreal Tramways Company (MTC) preferred tramways to buses, since buses were less comfortable and could not carry as many passengers. However, the company needed to replace several parts of the rail crossing on Saint-Étienne Street (now Bridge Street). Given the significant costs involved, the MTC opted to replace the tramway with buses. Two White trucks were converted into buses at the company’s Youville repair shops and the new service was launched on November 22, 1919. In 1921, two more trucks were converted into buses and assigned to the shuttle between Berri Street and St. Helen’s Island. 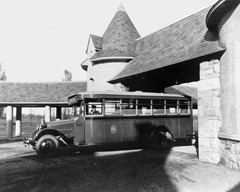 After these test runs, the time had come for the MTC to give a real chance to the bus, which had continually improved over the years. In 1925, the company created a bus division and launched three new routes in quick succession: Lachine-Montreal-West (August 6), Lachine-LaSalle (August 15) and Sherbrooke Street (August 19). This time, the MTC didn’t build its own buses, turning instead to American suppliers. New routes were quickly created on Saint-Hubert Street, in Outremont, in Verdun, and between the Bordeaux and Cartierville areas. The number of buses increased from 24 to 55 and the company opened its first bus garage in Saint-Henri, which had a capacity of 85 vehicles.