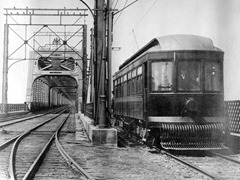 The M&SCRC was created as a result of a law passed by the Canadian Parliament on June 29, 1897. The service was inaugurated between Montreal and Saint-Lambert via the Victoria Bridge on October 30, 1909. The service was extended to Longueuil in 1910, toward Mackayville in 1912 and to Chambly, Richelieu and Marieville in 1913, Saint-Césaire in 1914, Saint-Paul-d'Abbotsford, Quebec in 1915, and finally Granby in 1916.

Absorbed by the Grand Trunk Railway, the M&SCRC became the property of CN in 1923.

The Montreal McGill Street Terminal was situated at the southwest corner of McGill Street and Rue Marguerite-d'Youville. The building that served as the station is still standing today.

Service declined starting in 1951, when CN replaced the electric tramways with diesel trains between Marieville and Granby. In June 1955, CN decided to remove the streetcar rails on the Victoria Bridge and service was cut back to Saint-Lambert. The streetcar made its final voyage on October 13, 1956.