The first tramways, which were drawn by horses along rails installed in the public roads, appeared in England in 1807. In Montreal, the harsh winters and steep inclines delayed the introduction of this type of network. It was only in 1861 that the city’s first public transportation company, the Montreal City Passenger Railway Company (MCPRC), was created. The MCPRC hired an American, Alexander Easton, to build its six mile (10 km) network. Construction began on September 18, 1861 and a first line was put into service along today’s Notre-Dame Street on November 27. A second line was inaugurated a few days later on Saint-Antoine Street. 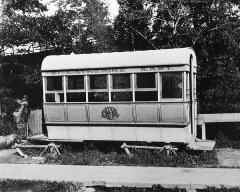 Each horse-drawn tramway had two employees: the driver and the conductor, who sold the tickets and collected the five-cent fare. Workers, who earned less than a dollar per day at the time, couldn’t yet afford this service reserved for a certain elite group. People simply hailed the tramway to have it stop and pick them up, and they could even ask the driver to wait a few minutes for them! In its first year, the company logged a million trips. Three types of cars were used: the summer tramway, which had open sides, the winter or sled tramway, which was very useful when the rails were covered with snow and ice, and the omnibus, a wheeled vehicle used when the rails were impassable, such as during the spring melt.

courtesy – Society of Transportation of Montreal