Created in 1911, the Montreal Tramways Company (MTC) quickly acquired all of the other transit companies on the Island of Montreal. This private monopoly caused some concern for the general public, who were worried about the quality of the service offered. Late that year, the new company opened its first repair shops in Youville, where the metro’s primary maintenance shops are currently located. A few years passed before the creation, in 1918, of the Montreal Tramways Commission, a public organization tasked with supervising the activities of the Montreal Tramways Company. This new balance worked quite well and the tramways were on the cusp of their golden age in Montreal. 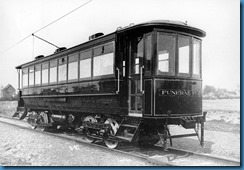 At its peak in the early 1920s, the Montreal tramway network comprised over 300 miles (500 km) of tracks and more than 900 vehicles carried nearly 230 million passengers per year. In 1924, the first network map was distributed and the tramway cars began indicating the route number. That same year, the first solotrams (tramways operated by one employee) appeared and passengers now had to board at the front of the vehicle. In 1925, a huge terminus was opened on Craig Street, today’s Saint-Antoine West. In 1929, the MTC moved its offices just next door and, the following year, the company launched its Mount Royal tramway line.