Westmount Conservatory To Be Restored 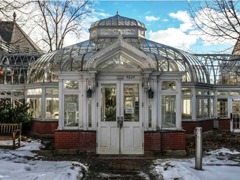 When the city of Westmount restored its public library in 1995, it faced the challenging task of modernizing the building while respecting its historical look and feel.

To do so, it pored over historical photos to find matching chandeliers and wallpaper and sought out the original manufacturer, located in Waterloo, Ontario, that had supplied the library with wooden oak armchairs nearly 100 years earlier.

When the city expanded the Victoria Hall Community Centre building next to the library three years later — it had been rebuilt in 1925 after initially opening in 1899 — it had the same goal in mind: restore, but respect the building’s historical character.

The architect in charge managed to find limestone and sandstone from the same quarry the building’s original materials came from to ensure the extension matched the rest of its facade.

Now the city hopes to do the same as it undertakes major restorations at the Westmount conservatory and greenhouse complex, closed since a pane of glass fell and nearly injured a man below in September 2015.

But the project has already proved to be challenging. Some of the materials used to build the complex back in 1927, such as cypress wood, are no longer commercially available, and architects, engineers and construction companies with experience in building large and historical greenhouses aren’t easy to come by.

“If it were a more standard building, we probably would have been in construction by now,” Westmount Mayor Peter Trent said on Wednesday. “But we have to approach this extremely carefully, while keeping the same goal in mind — bringing it back to its former glory.”

Working with engineering firms, the city is looking into equivalent materials — including British Columbia fir — that could resemble the wooded purlins used when the building was initially built.

The city used a drone to photograph the exterior and interior of the greenhouse and document the extent of the damage after the glass pane collapsed last year. A structural assessment completed afterward led it to believe a complete restoration was a better option than partially fixing the failing structure.

According to Benoit Hurtubise, Westmount’s assistant director-general, the building’s infrastructure is sound; it’s the glass and wooden envelope above it that’s at risk of collapsing.

“One way or another, eventually we would have to do a complete restoration,” Hurtubise said, “so we rather bite the bullet and do it now.”

Hurtubise said a growing impatience among residents could be felt after the complex was first closed in 2015. It’s the only nearby indoor botanical garden and is often visited by people trying to escape the cold for a couple of hours during winters.

“But really, we will spend whatever is required to bring it back to what it was,” Trent said. “This is a piece of Westmount architectural history, but it also serves a purpose and is a beautiful building in its own right.”

The city has put aside $1 million in its 2017 budget for the project, and expects to have a call for tenders early next year. But it’s unlikely the greenhouse complex will be completely restored and reopened until 2018.

Paul Marriott, president of the Westmount Municipal Association, a nonpartisan community organization, said despite some initial doubts about why the complex was closed for so long, overall, most residents agree the city should take the time required to restore it properly.

“Essentially we’re custodians of the architectural heritage for future generations. You can’t just say ‘it’s too expensive, I’m going to abandon it.’ You have a certain responsibility,” Marriott said. “It’s been there for almost 100 years. There’s no reason to believe it couldn’t be there for another 100 years.”