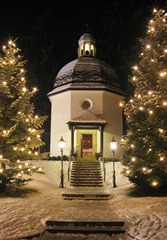 The song was first performed on Christmas Eve 1818 at St Nicholas parish church in Oberndorf, a village in the Austrian Empire on the Salzach river in present-day Austria. A young priest, Father Joseph Mohr, had come to Oberndorf the year before. He had written the lyrics of the song "Stille Nacht" in 1816 at Mariapfarr, the hometown of his father in the Salzburg Lungau region, where Joseph had worked as a co-adjutor.

The melody was composed by Franz Xaver Gruber, schoolmaster and organist in the nearby village of Arnsdorf. Before Christmas Eve, Mohr brought the words to Gruber and asked him to compose a melody and guitar accompaniment for the Christmas Eve mass. Together they performed the new carol during the mass on the night of December 24.

The original manuscript has been lost. However, a manuscript was discovered in 1995 in Mohr's handwriting and dated by researchers as c. 1820. It states that Mohr wrote the words in 1816 when he was assigned to a pilgrim church in Mariapfarr, Austria, and shows that the music was composed by Gruber in 1818.

In 1859, the Episcopal priest John Freeman Young, then serving at Trinity Church, New York City, wrote and published the English translation that is most frequently sung today, translated from three of Mohr's original six verses. The version of the melody that is generally used today is a slow, meditative lullaby or pastorale, differing slightly (particularly in the final strain) from Gruber's original, which was a "moderato" tune in 6
8 time and siciliana rhythm. Today, the lyrics and melody are in the public domain.

The carol has been translated into about 140 languages.

Silent night, holy night,
All is calm, all is bright
Round yon virgin mother and child.
Holy infant, so tender and mild,