Now in its 18th year, Canadian Pacific's annual Holiday Train will travel across Canada and the northern United States to raise money, food and awareness for food banks and hunger issues while hosting free concerts along the way.
Since its launch in 1999, the program has raised more than C$12 million and nearly 4 million pounds of food for communities along CP's routes. 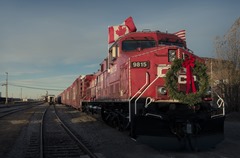 There will be two trains under the Holiday Train banner, each approximately 1,000 feet in length with 14 rail cars decorated with thousands of LED lights and a boxcar that has been converted into a traveling stage.

"For nearly 20 years, CP has watched communities turn out to enjoy a wonderful event while taking a stand against hunger," E. Hunter Harrison, CP's CEO, said. "We are proud of the role the Holiday Train plays, but more importantly, we're proud of the people and families that come out year after year to help their neighbors. They're the reason we keep bringing the train back."

One train will launch on Nov. 25 and the other launches a day later - both out of Montreal. The final shows of the U.S. train will be in Saskatchewan on Dec. 15 and the final show of the tour will be in Port Coquitlam, British Columbia, on Dec. 17.
Every pound of food and dollar raised at each stop stays with the local food back to help those in need in that community.

The Canadian train will feature musical guests Dallas Smith and Odds, while the U.S. train will feature Kelly Prescott and Doc Walker between Montreal and Windsor, Ontario and Colin James covering the Midwest and Great Plains shows. Jonathan Roy will perform at the Quebec locations.

"We are very excited about this year's CP Holiday Train and are encouraging all event attendees to bring healthy, nutritious food items to the shows," Pam Jolliffee, interim executive director for Food Banks Canada, said.

Fans of the Holiday Train are encouraged to take photos capturing the train in various cities and landscapes and entering the "Capture the Spirit" photo contest on Facebook for a chance to win an exclusive ride on next year's train.

For those not in the area of the Canadian Pacific Holiday Train, there are various holiday-based excursions around the country. Here is a state-by-state list we've put together.