No house in Montreal's history has been the object of so much struggle and the subject of so many unfulfilled aspirations as Burnside house, which once stood on McGill College Avenue just up from Maisonneuve. 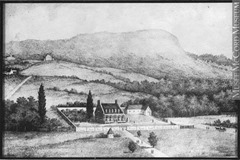 Like many fur traders who had made their fortunes and wished to settle down, James McGill purchased a farm on the side of Mount Royal. He called it Burnside after the stream ("burn" in Scots) running through it. The property was about 46 acres, and featured orchards and fields, as well as a "very commodious country house…with a most excellent garden." McGill's diary accounts of growing hay, apples, melons, cucumbers, peaches and grapes all reinforce the image of a comfortably retired gentleman. Having no children of his own, and knowing his wife's sons from a former marriage were well taken care of, McGill willed the Burnside estate to the newly-formed Royal Institution for the Advancement of Learning in hopes that this paragovernmental body would establish a college on the estate - what eventually became McGill University.

James McGill died in 1813. While the Royal Institution was getting its act together, McGill's stepson decided he had rights to Burnside, and a legal battle ensued. In was only in 1829 that the Royal Institution was able to occupy the estate, and the first principal, the Reverend George Mountain, could preside over the college's official opening at Burnside house. But after the court case there were no funds left to hire professors, so the house and estate were leased to farmers for several years. Mountain, moreover, lived in Quebec City, so a local man to replace him as principal was found in 1835: the Reverend John Bethune. Bethune decided that Burnside house should be the principal's official residence, and moved in - quite against the wishes of the Royal Institution. Bethune promoted the construction of what became known as the Arts Building higher up the hill on another part of the estate. When it opened, in 1843, teaching could at last begin - although in the first year there were only three students.

Having decided that it would fund the running of the new college by renting the lower part of the estate, the Royal Institution asked Bethune to vacate the house, which he did only after a great deal of protest. He also took the entirely inappropriate step of personally engaging a real estate agent, Joshua Pelton, to subdivide the lower part of McGill's estate as building lots, with rent money going directly into the principal's hands. Furthermore, this arrangement was made in such a way that Pelton was able to claim he was now the owner of the land. Pelton leased the house and gardens to a market gardener, Neil McIntosh, who at one point had the Royal Institution, Pelton, and the college bursar, Joseph Abbott (father of the future prime minister), all asking him for rent. McIntosh eventually left in confusion, but it was not until 1847 that the Royal Institution was able to force Pelton out and reassert its ownership. By that time the economy was sluggish, so the Royal Institution secretary, William Burrage, was allowed to occupy the house for four years, while local farmers used the grounds for pasture. On occasion, the Montreal Cricket Club was allowed to practice in the Burnside fields.

Attempts to sell bits of the estate to raise money were not very successful even after the economy began to revive, but in 1852 the Royal Institution decided it could profitably generate income by leasing the house. The new occupants were the Birks family, whose son Henry would later found a famous jewellery store. The gardens, as well as part of the basement and one of the outdoor privies, were leased to market gardener William Riley. Within a few years, lot sales did pick up, and a new street was laid out running straight up to the college: appropriately, it was called McGill College Avenue. By 1857 lots along this new street were purchased by builders who put up elegant terraced houses. Burnside house, which straddled lots 74 and 75, soon looked rather drab in the midst of this new fashionable neighbourhood. Nevertheless, the enterprising Riley bought both lots and moved in for several years.

In 1863 Riley rented the house (but stayed on as the gardener, apparently living in part of the basement) to Isabella and Annabella McIntosh (daughters of former Burnside tenant Neil McIntosh), who operated a ladies academy there. A few years later, the McIntosh academy (renamed Bute House School) moved up to the corner of Sherbrooke Street and other private schools occupied Burnside house until it was in such need of repair that Riley sold it and it was torn down. Once fought over, James McGill's old home was now an embarrassment next to the mansions around it and the shining university thriving just above it.