On 1 st  January 1906, Montrealers flock to the entry of a new institution of "moving pictures", the Ouimetoscope. Located in the Poiré room, on the corner of Montcalm and Saint-Catherine streets, the new attraction brings home a hundred dollars to its owner, Léo-Ernest Ouimet, in the first week. 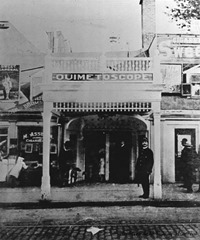 Born in Saint-Martin on Île Jésus (today Laval) in 1877, Ouimet leaves the family farm to move to Montreal. He learned the trade of electrician and became a theater lighting designer. Strongly interested in the new medium of cinema, he takes care of projections at Sohmer Park, produces short films and creates a company, the Ouimet Film Exchange. The projection device he conceives, the Ouimetoscope, even influences the work realized by Thomas Edison. As part of his documentary achievements, Ouimet will appeal to Lactance Giroux as a cameraman. The latter became, in 1920, the first photographer hired by the City of Montreal.

In 1907, Léo-Ernest Ouimet demolished the building he occupied and began construction of the "Grand Ouimetoscope" which opens these doors in August. The following year, several cinemas opened their doors and the competition became more fierce. The American film distribution monopoly created Canadian branches and thus eliminated Ouimet from this market. At the same time, the Montreal Church began its campaign against Sunday cinematographic performances. At the end of the summer of 1908, Mayor Louis Payette, yielding to the pressure of the League for the observance of Sunday, caused contraventions to the various cinemas. Due to lung problems in two of his children, the Ouimet family settled in California each winter from 1913.

During the First World War, Ouimet withdrew from the projection to redo the distribution again and especially the realization. Among other things, he was given a film about the opening of the Bibliothèque de Montréal by Marshal Joffre in May 1917.

Following the death of two of his children, Ouimet settled down in Los Angeles in 1921, Produced the feature film Why get married that will have little success. His financial situation degraded, he accepted a position for a distribution company in Toronto but returned to Hollywood in 1930. Ruined, he returned to Quebec in 1933 to become a year later manager of the Imperial cinema. Since his financial situation had not improved, he accepted a position as manager of a branch of the Commission des liqueurs. At the time of his retirement in 1956, he was a store clerk. He died on 2 March 1972 at the age of 94 years. 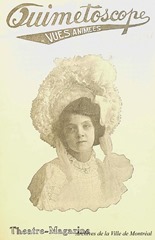 In 1978, Léon H. Bélanger's nephew, Léon H. Bélanger, published a book on the life of his uncle and the beginnings of the Quebec cinema, Les Ouimetoscopes. In May 1979, the author handed over his manuscript to the city's archives. This document and its printed version constituted the Fonds Léon H. Bélanger ( P55).