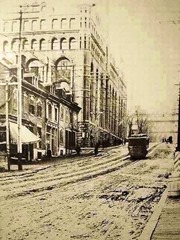 Looking north on a very muddy Windsor St., corner of St-Antoine in 1904.

Behind the early Montreal Tramways streetcar, we see a faint outline of the elegant Le Windsor, then and now,  a historical nine-story structure, offering palatial splendor with a gold-embossed lobby, six restaurants,two ballrooms, concert hall and 382 luxurious guest-rooms.

Today  Windsor Station is not connected to any track and has been developed into a hotel and retail complex, with access the Lucien-L'Allier metro (subway) station which is below the station building and a connection to the Bell Centre, home of the Montreal Canadiens hockey team.