Prior to the construction of bridges to the South Shore, it was difficult, and at times, impossible to cross the St. Lawrence. During the summer, people had to travel by boat. One would cross over to Longueuil often by passenger Shull rowing boats. From there, one could board passenger trains to the United States or take stagecoaches to other locations. The same would be true for the shipping of trade goods on and off the island of Montreal. During the winter months ...travelers and goods would wait until the river froze over before crossing on well marked paths across the ice. Those who wondered off these paths risked plugging through thin ice and a cold death.

The South Shore of pre-Victoria Bridge had few inhabitants who mostly lived in small villages along the river. Opened in 1859, the 1.9 mile long Great Victoria bridge was the first to span the St Lawrence River, and was first used only for train traffic.

Passenger lanes opened following renovations in 1897 and were rededicated as the Victoria Jubilee Bridge. This would easier access route change both the industrial and social migration direction as the South Shore became the first off-island suburbs
Montreal residents often escaped the summer heat by taking a day trip to the countryside, or owning a weekend cottage, on the South Shore of the river. When land on the island of Montreal began to get more expensive and further away, developers started looking off the island for cheap farmland and building a tramway link into the industrial heart of the city. With Montreal's industrial heart now based along the Lachine Canal and the Glenn Yards, it was an easy leap for workers to begin looking to move to the South Shore.

South Shore tramway development began with the newly formed Montreal Southern Counties Railway line. MSCR was Canada‘s first commuter electric trolley line would allow easy access into the city for work, and a means of returning home to the calm and cleaner air of the country in the evening. 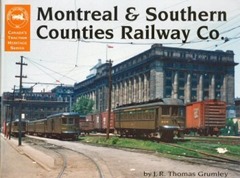 A little train line that would open up the South Shore
Owned by then Grand Trunk Railway and later the Canadian National Railway, Construction of the M&SC began in 1906 with completed sections being opened for regular passenger service as follows: between Montreal and St-Lambert commencing on November 1, 1909; extending to Montreal South (Longueuil) on May 30, 1910; Greenfield Park and MacKayville on November 1, 1912; Richelieu on June 28, 1913; Marieville on September 28, 1913; St. Cesaire on May 3, 1914; By 1916, the M&SCR would be able to take passengers as far as Chambly and later reach into Granby.

The tramway would run from D'Youville Square at the bottom of McGill College Street in Old Montreal across the Victoria Bridge over into Saint-Lambert. From the switching station in Saint Lambert, one could board a trolley train to either Montreal South or get a connection to as far away as Granby.

The early residents were first generation Canadians often from Great Britain who had located in Pointe-St. Charles to work in the Glenn rail yards or in the many factories and plants that lined the Lachine Canal. Many were higher paid trades’ people who had learned they could purchase cheap land in the countryside far away from the smoky industries of "the Point" and still be able to commute to their jobs in less then an hour. The South Shore with its promise of home ownership became an attractive destination.
The better off folk took root in the towns of Saint-Lambert and Montreal South which were closest to the city. Further down the rail line, Greenfield Park and MacKay Ville became home to the trades- people who were mostly British immigrants from the Midlands. They brought with them their passion for gardening. By the 1930s, a majority of the population of the communities of Saint-Lambert, Montreal South, Greenfield Park, MacKay Ville, Croydon, East Greenfield, Brookline and Pinehurst were English-speaking.

During the warm summer afternoon Montreal day trippers would take the MSCR out to spend the afternoon playing baseball in the fields , swimming in the creaks that surrounded Saint Hubert and in those days the GREENFIELDS of Greenfield Park.

The typical trolley cars used by the M&SCR during its fifty-year run were purchased second -hand (even third) and were already well past their prime… Early passengers had few comforts, however later trains featured toilets and the every so often working heaters for those winter commutes. M&SCR – was nicked named the Montreal & Suffering Counties Railway ...

However despite their discomfort the MSCR would serve as the main public transit system for almost fifty years ... With trains serving as the centre point for a dozen small communities. By the 1950’s with more private cars and better access to the Jacque Cartier and Victoria bridges passage use was dropping off. By 1955 CNR who now owned the Victoria Bridge announced plans for improved two way lanes for automobiles and would no longer allow the MSCR to use the tracks along the Bridge .. This was the final nail in the coffin for the little train line that brought so much to Montreal’s South Shore. So on October 10,1956 the Montreal and Southern Counties trolley line would have its last run