Bain Maisonneuve opened its doors in 1916. It included a bath and a gymnasium. This building was part of a program to improve the hygiene and the security in the city of Maisonneuve. At the beginning of the 20th century, not all the houses were equipped with a bath, so the Maisonneuve public bath was useful in regards to general hygiene. However, six days per week the public bath was open to men only; women were allowed in the building on Tuesdays only. 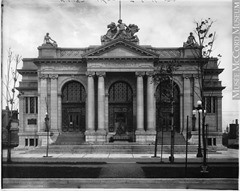 Bain Maisonneuve was designed by architect Marius Dufresne. Dufresne contributed a lot to the development of the city of Maisonneuve; for example, he designed the Maisonneuve Market and the Château Dufresne, the latter one in partnership with French architect Jules Renard. The Maisonneuve public bath was inspired by a city planning concept from the United-States, called "City Beautiful", which aimed to improve and embellish the cities.

This Beaux-Arts style building has similarities with the Grand Central Station in New York. It is also inspired by the public baths of the Antique Rome. In front of the building, there is a bronze sculpture-fountain, entitled ''Les petits baigneurs", from artist Alfred Laliberté.

In 1918, due to bankruptcy the city of Maisonneuve was integrated to Montreal. As the new owner of the Maisonneuve public bath, the city of Montreal decided to turn it into the École de police de la Ville de Montréal. Thus, from 1920 to 1960 the building served as a training centre for the young policemen.

The building changed name for Bain Morgan in 1961. It returned to its first vocation and is still today a public swimming pool.