Prior to 1845, the land plot where the La Fontaine Park is was occupied by M. James Logan's farm. In 1845, the government of Canada purchased Logan’s land and used it as a training ground for British soldiers. In the second half of the 19th century, the authorities realized that there were few green spaces in Montreal, and they wanted to rectify this situation. Thus, in 1874 the city of Montreal leased the land and created a public park, which they called Logan Park. This project took place at the same time than the creation of other big parks of Montreal, such as the Mont-Royal Park and the St. Helen’s Island. 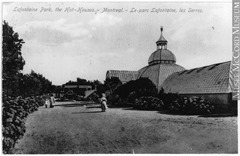 In 1889, trees were planted in the East part of the park, and greenhouses from the Viger Park were installed. Until 1952, all the flowers that ornamented the city grew in the Logan Park’s greenhouses.

In 1890, a house was built for the park keeper. It was occupied during 60 years by Mr. Bernadet, superintendent of the Montreal’s parks. 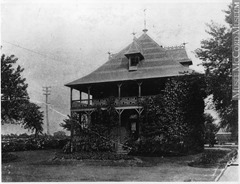 In 1900, two basins, a cascade and a bridge were installed in the park. The next year, the park’s name was changed to La Fontaine Park, in memory of Prime Minister Louis-Hippolyte La Fontaine.
In 1931, the Calixa-Lavallée pavilion was built according to the plans of architect J.-Albert Bernier. This neo-Romanesque building still stands in the park today.

In 1950, the La Fontaine Park was completely refurbished under the direction of Claude Robillard, director of the parks division of the city of Montreal. The lodge-restaurant was built according to the plans of architect Donat Beaupré. The refurbishing plan also included a place for concerts and an amphitheatre. In addition, the two basins were modified and a new bridge was built. The greenhouses and the keeper’s house were demolished.
In 1956, the Théâtre de Verdure, an outdoor stage for shows, opened. It still features free shows today.

From 1957 to 1989, the Jardin des merveilles was open to the public in the La Fontaine Park. This section of the park featured farm animals, exotic animals and sea lions.

In 2011, a restaurant and cultural center, Espace La Fontaine, opened in the central pavilion of the park.