In 1917, during a recession, urban agriculture came out of the shadows. The Montreal Cultivation Committee lobbied Maisonneuve, then an city industrial city that was independent from Montreal, for formal urban agricultural programs.

Maisonneuve transformed at the future Maisonneuve Park into a gigantic vegetable garden in order to feed the poor. But planting crops required investment and the city had not approved a budget. In order to do his job, the garden’s superintendent, J.N. Lamy, gambled—he bet the harvest could cover the costs of starting the garden as well as feed the city’s poor. 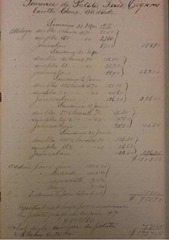 We don't know much about J.N. Lamy, even his full name is a mystery. Like most ordinary men, he left few traces in the archives. But when he was the garden superintendent he kept meticulous records. Most of his notes are in one yellow covered ledger titled Cultures intensives de Parc Maisonneuve. He titled it intensive agriculture because he knew it was a huge venture. Every week, Lamy recorded the jobs completed and the hours his team of five worked. He calculated how much tending the garden cost—the tally carries forward for over twenty pages. Each detail was recorded in a steady, neat cursive. There is one exception; the recurring notation “chargés aux patates” is slightly askew. It crawls up the margins. The three words accompany smaller expenses Lamy couldn’t afford to pay. The note became more common as the season progressed.

A new venture meant everything has to be bought or borrowed, but Lamy had few resources. On May 29th, Lamy bought $241.75 worth of seeds on credit. He then bartered part of the harvest to rent a harrow, buy burlap sacks, and hardware to build fences. The note “chargés aux patates” preceded each purchase. The humble potato became currency, like salt during the Holy Roman Empire.

If it had been a meager harvest, it's unclear how Lamy would have covered the expenses or what he would have said to hungry families who were promised potatoes. City council did not know what Lamy was doing. The superintendent’s reports contained concrete numbers and no mention of the charge-to-the-potato system. By June, the potato seeds had cost $771.65 and another $955.80 was spent in wages, yet not one green stem poked above the ground.

In September, Lamy and his men leaned on their shovels and dug into the ground. Whiffs of sweat and loam must have made Lamy suck in his breath, hopeful. Their shovels tilted the earth up and revealed mounds of Prince Edward
Potatoes like gold nuggets. The team pulled potatoes out of the ground until the end of October, filling 1,050 eighty-pound sacks. The heavy sacks may have eased Lamy’s mind—the wait was over, the gamble won. He managed to feed several hundred families and cover his costs.

Lamy checked off all but one of the charged-to-the-potatoes marginalia. It was an end of season bonus that he had asked the city to approve. As superintendent, Lamy earned eighteen dollars a week--the same as the labourers, but he had more experience and responsibilities. The man who invented the charge-to-the-potato system tested it one last time. He asked for ten sacks of potatoes. Jos. Écrement, Maisonneuve Secretary-Treasurer, refused and the next day ended Lamy’s contract. Lamy helped feed the city, but the harvest must have been bittersweet.