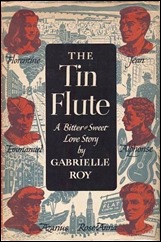 The story takes place in Montreal, principally in the poor neighbourhood of Saint-Henri, between February 1940 and May 1940, during the Second World War, when Quebec is still suffering from the Great Depression.

Florentine Lacasse, a young waitress at the "Five and Ten" restaurant who dreams of a better life and is helping her parents get by, falls in love with Jean Lévesque, an ambitious machinist-electrician. Wanting to satisfy his withered ego, he agrees to date Florentine. Quickly tiring of the relationship, Jean introduces her to a friend, Emmanuel Létourneau, who is a soldier on leave. Emmanuel falls in love with Florentine. Despite this, Florentine's attraction towards Jean will have important consequences in her life. A parallel thread in the novel is the Lacasse family life, made difficult by their poverty.

The Tin Flute (original French title Bonheur d'occasion, "secondhand happiness"), Gabrielle Roy’s first novel, is a classic of Canadian fiction. Imbued with Roy’s brand of compassion and understanding, this story focuses on a family in the Saint-Henri slums of Montreal, its struggles to overcome poverty and ignorance, and its search for love.

A story of familial tenderness, sacrifice, and survival during World War II, The Tin Flute won both the Governor General's Award and the Prix Femina of France. The novel was made into a critically acclaimed motion picture in 1983. It was originally published in French as Bonheur d'occasion (literally, 'secondhand happiness'), which represents the character's sense of rebound love in the novel.

Roy's first novel, Bonheur d'occasion (1945) gave a starkly realistic portrait of the lives of people in Saint-Henri, a working-class neighbourhood of Montreal. The novel caused many Quebecers to take a hard look at themselves and is regarded as the novel that helped lay the foundation for Quebec's Quiet Revolution of the 1960s.

The original French version won Roy the prestigious Prix Femina in 1947. Published in English as The Tin Flute (1947), the book won the 1947 Governor General's Award for fiction as well as the Royal Society of Canada's Lorne Pierce Medal.

Distributed in the United States, where it sold more than three-quarters of a million copies, the Literary Guild of America made The Tin Flute a feature book of the month in 1947. The book garnered so much attention that Roy returned to Manitoba to escape the publicity.