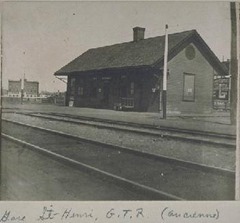 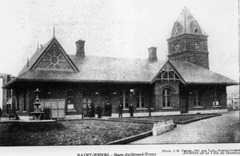 The Montreal and Lachine Railroad was inaugurated several years's later in 1847 to provide a land link to bypass the treacherous section of the St Lawrence before the Lachine Canal was built. This railroad went through the middle of through St Henri and stopped near the corner of St Jacques and St Henri. Other stops included Bonaventure, Montreal West, and Beaconfield. 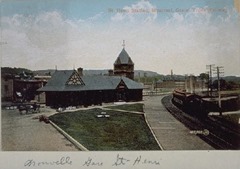 In 1853, the Grand Trunk Railway was formed from an amalgamation of several smaller rail companies including the Montreal and Lachine Railroad. The first part of this line extended from Sarnia to Toronto and then Montreal. The second part ran from Montreal to Levis (on the South Shore of Quebec City) and then to the border of New Brunswick (then a separate British colony) where it met with the Intercolonial Railway.
Rapid expansion and heavy competition resulted in The Grand Trunk's bankrupcy in 1919. The Federal Government took over the railway that year, placing it under the management of the Canadian National Railways in 1923.