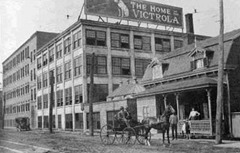 This was home of Berliner Gramophone Company. Note the sign showing Nipper the dog, the Berliner logo, followed by The Home of the Victrola.
(photo dated approx 1912)

The building now known as the RCA Victor building on Lenoir Street was originally built by the Berliner Gramaphone Company between 1908 and 1921 for the production of gramaphone equipment. Emile Berliner was born in Germany, moved to Washington, and finally settled in Montreal. He invented the telephone microphone, the gramophone and the flat record. When construction was completed in 1921, Berliner Gramophone possessed one of the most modern factories in Montreal. The 50,000 sq. ft. plant made both players and records.

The Gramaphone Company bought the now-famous painting of Nipper the Dog from the English painter Francis Barraud in 1896.  Barraud had first offered the painting to representatives of the Edison-Bell Company who turned him down telling him that "dogs don't listen to phonographs".

This trademark first appeared in 1900 in Montréal on the back of record # 402 - "Hello My Baby", by Frank Banta.   This classic logo has adorned millions of Gramaphone, RCA, and RCA Victor recordings over the last 100 years.