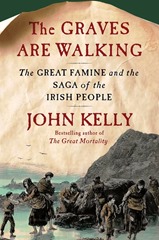 Deeply researched, compelling in its details, and startling in its conclusions about the appalling decisions behind a tragedy of epic proportions, John Kelly's retelling of the awful story of Ireland's great hunger will resonate today as history that speaks to our own times.

It started in 1845 and before it was over more than one million men, women, and children would die and another two million would flee the country. Measured in terms of mortality, the Great Irish Potato Famine was the worst disaster in the nineteenth century--it claimed twice as many lives as the American Civil War.

A perfect storm of bacterial infection, political greed, and religious intolerance sparked this catastrophe. But even more extraordinary than its scope were its political underpinnings, and The Graves Are Walking provides fresh material and analysis on the role that Britain's nation-building policies played in exacerbating the devastation by attempting to use the famine to reshape Irish society and character. Religious dogma, anti-relief sentiment, and racial and political ideology combined to result in an almost inconceivable disaster of human suffering.

This is ultimately a story of triumph over perceived destiny: for fifty million Americans of Irish heritage, the saga of a broken people fleeing crushing starvation and remaking themselves in a new land is an inspiring story of revival.

Based on extensive research and written with novelistic flair,The Graves Are Walking draws a portrait that is both intimate and panoramic, that captures the drama of individual lives caught up in an unimaginable tragedy, while imparting a new understanding of the famine's causes and consequences.