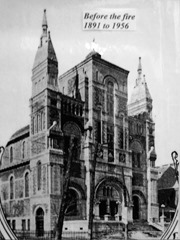 St. Gabriel’s was the second Irish Catholic church built in Point St. Charles, erected on the site of an older church dating to 1875. As is almost always the case in Montreal, Irish and French-Canadian Catholics, despite their geographic and social proximity, have separate parishes. In 1875, the Irish outnumbered French Canadians in Point St. Charles and for a short time St. Gabriel’s served both linguistic groups. 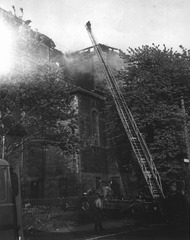 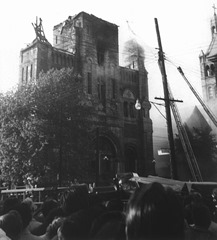 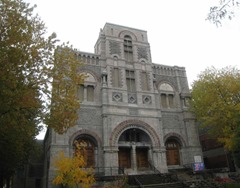 Over the years the number of English-speaking Catholics in the Point decreased, but many former residents, and in fact many others from the greater Montreal area adopted St Gabriel's as their own.
The Irish in particular are very fond of the parish. For many years, two Sundays before St Patrick's day, a popular mass of anticipation has been celebrated in the church. And on the last Sunday of May, after Sunday mass, there is a walk from the church to the Stone at the foot of Victoria bridge. It is there that so many Irish, and many French Canadians who cared for them, died of typhus.

Photographs of the fire courtesy - Perry Barton and Carlo Pielroniro