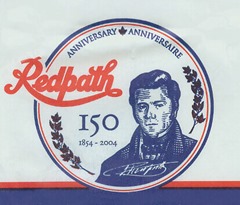 Redpath Sugar was established as the Canada Sugar Refining Company in 1854 in Montreal, Quebec by Scots-Quebecer entrepreneur, John Redpath (1796-1869).

Located on the bank of the Lachine Canal, the giant complex was the first of its kind in Canada, using sugar cane imported from the British West Indies. Its construction was part of the economic boom that, during the 19th century, turned Montreal from a small town to (then) the largest city in Canada and the country’s economic engine.

Following the tariff protections implemented under the National Policy by the government of Sir John A. Macdonald, the company reopened in 1879, as did St. Lawrence Sugar, a new competitor established in Montreal. George Drummond took over when Peter Redpath retired in 1888. Under his guidance, the company's success allowed for construction of a new six-storey plant built on the existing site, doubling production capacity.

In 1930, the company merged with Canada Sugar Refining Company Limited of Chatham, Ontario. In 1959, Redpath Industries Ltd. was acquired by the British company Tate & Lyle plc. The Redpath Sugar Refinery was built on the Toronto waterfront in the late 1950s, at the time of the completion of the Saint Lawrence Seaway, and is still in operation.

David Davis, later a senior Conservative politician, was sent from Britain to restructure its Canadian subsidiary. In 1980, the Montreal plant was closed and production was shifted to Toronto. In 2007, the company was taken over by American Sugar Refining.