The 4th name on the memorial stone in Victoriatown belongs to Lance Sergeant Joseph Chapatis born 27/Oct/1919 in Montreal to John and Madelaine Chapatis, one of 7 children.

Joseph was of English/Lithuanian descent and worked at Montreal Drydock Company as a foundry worker.

He enlisted in the Royal Canadian Artillery, 27th Field Artillery as a gunner and fought in the Mediterranean Theatre.

He married Olive Clark of Edinburgh, Scotland on 27/Sep/1941, they had one son, Joseph Chapatis, Jr., who was born only months before his fathers death. Joseph left a handwritten will leaving everything to his wife and son.

Joseph died of his wounds on 27/Dec/1943 and is interred in Moro River Canadian Military Cemetery in Abruzzo, Italy. 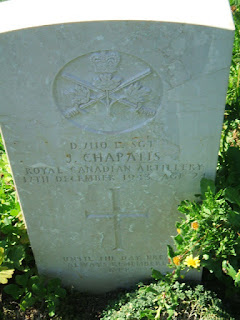 He was awarded posthumously: