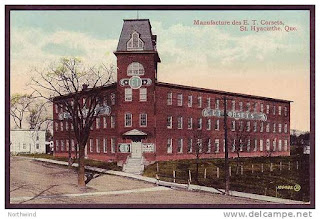 The days are numbered for the building that once housed the Eastern Township Corset, located at the corner of Laframboise and Delorme streets in the Sacred Heart area of Saint-Hyacinthe.

The demolition of the building which was established in 1892 would be a loss to the industrial heritage of Saint-Hyacinthe as it is the oldest industrial relic still standing in the city.

Developers want to demolish this building in order to build a new one, so much for the sense of belonging to our city and its heritage. Instead, why not give it a restoration and claim the charm of yesterday year for generations to come.

Industrialization appeared in Saint-Hyacinthe in the last decades of the nineteenth century, the promoters set up their factories near the Yamaska River to use the driving force of the water. It was the first industrial park in Saint-Hyacinthe.

The second Maskoutan industrial pole was installed near the station and the railway to be able to facilitate the carriage of manufacturing. Thus, at the turn of the nineteenth and twentieth centuries, the city has a policy to encourage the establishment of factories near the railway. The textile industry has long been the trademark of our community with its many factories and school on Laframboise street.


The Guide to Saint-Hyacinthe from 1894 tells us more about the Eastern Township Corset Co. This company was founded in 1880 by O. Gendron in Sherbrooke. In 1892, then moved to Saint-Hyacinthe. The owners then erected "the largest factory Dominion corsets. "Importantly, the City of Saint-Hyacinthe gave a" bonus "to  plants that moved here. At that time, the Corset employs between 175 and 200 employees.

In 1909 the activity of the corset company makes changes to the neighborhood. Indeed, Mr. J N Dubrule, CEO of the company Eastern Townships Mfg.Co. sends a request to the City of Saint-Hyacinthe April 23, 1909 on the public opening of the Delorme Street located on the property of Georges Casimir Dessaulles.

"At his Worship the Mayor and gentlemen Aldermen of the City of Saint-Hyacinthe.

Whereas our employees responsible for "carting" of our own materials to manufacture, have been denied by the employee of the Honourable Mr. Dessaulles, the transition path between the Laframboise and rue Ste Anne, the latter claiming that this path was private and, in addition, as we know that at this place, a street named Delorme was verbalized, so please make your kindly Council open this street immediately in order to avoid us trouble. "

In 1948, nearly 125 people specializing in women's clothing lingerie worked at this plant, which was closed in 1979.

Hundreds of men and women have worked in the sweat of brow to improve their lot. They left their mark in this building.

My three eldest paternal grand-aunts, Adrienna, Evelina, and Amelia worked at ET Corsets while still living at home in Saint-Hyacinthe.