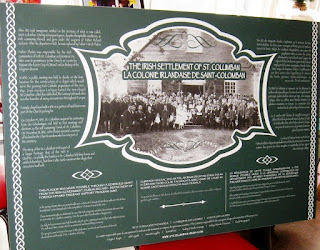 This plaque was made possible through a generous grant from the Irish Government, Dublin, Ireland - Department of Foreign Affairs Emigrant Support Program (2010).

After 1821 the Irish immigrants settled on the territory of what is not called Saint-Columban. During subsequent years, despite inhospitable conditions, an Irish community thrived and grew under the auspices of Father Richard Jackson. After his departure in 1825, he was replaced by Father Patrick Phelan. Father Phelan was responsible for the Irish communities of both St. Columban and Montreal. He later rose to prominence in the Church as Curate for Bytown (the future city of Ottawa) and as Bishop of the Kingston diocese.

In 1830, a public meeting was held to decide on the best location for the construction of a chapel which would serve the growing Irish Catholic population of the area. Mgr. Jean-Jacques Lartigue named the new chapel St. Columban after the celebrated 7th Century Irish monk who was the founder of many monasteries throughout Europe.

A simple chapel was built in 1831 on a portion of land that is now part of the Church parking lot. On October 14, 1835, St. Columban acquired its autonomy from Ste-Scholastique and held its first meetings and elections as the self sustaining Parish of St. Columban.

On December 28, 1836, John Plelan donated a section of his land to the Church wardens which is now part of the cemetery.

The story of the St. Columban Irish is part of a larger heritge, that of the Irish in Quebec. Gradually the families in St. Columban left their farms and settled elsewhere, but their Celtic mark remains in the village their ancestors had built.

In the spring of 2010, three monument walls were constructed. Mounted onto these walls were the broken headstones (some dating back to the early 1800's) that were found in the area. These monument walls are dedicated to over 700 Irish immigrants and their descendants who were laid to rest in the St. Columban cemetery.

Over the years their burial markers disappeared. On July 3rd a procession was held from the church to the cemetery. It was led by Father Mike McKenna. The walls were then consecrated in an emotional and heart-lifting ceremony. 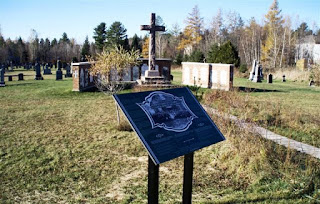