Quebec City has 30 stairways that connect the Upper and Lower towns, each has a story to tell, here are five such stairways.

Also known as the Sainte-Claire or Le Soleil Stairs, Escalier du Faubourg was built out of wood some time before 1858 and rebuilt in iron in 1889. The current version dates back to 1931. In the opinion of historian Yves Beauregard, this three-level staircase is the city's “most graceful and soaring.” From the top, you'll have a splendid view of the Saint-Roch district and the Laurentian mountain range. You'll notice a portrait of the mayor of the time (1882–1890), François-Charles-Stanislas Langelier, built into the iron arch decorating the stairs.

Built out of wood in 1857, this stairway was demolished and rebuilt in iron in 1883. Officially given the name Lépine in 1986 after a nearby funeral home, this stairway is undeniably one of Québec City's loveliest. The finely worked wrought iron arches at each end seem woven out of floral symbols. They also bear the names of the prominent citizens who made the construction possible. The arch at the bottom is the original, while the one at the top is a copy.

The Breakneck Stairs linking côte de la Montagne with rue du Petit-Champlain were built in 1635, making this the city's oldest stairway. In 1660, this staircase appears on a map of the village that grew into Québec City. The stairs have been restored several times since then, including once in 1889 by the city's celebrated architect and engineer Charles Baillargé. Local residents gave it the name Breakneck because of the steep incline. 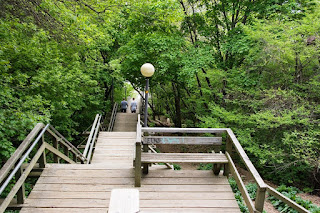 Québec City's longest staircase was built out of wood in 1868. At the time, it was used by the workers of the Cap-Blanc district to walk to work in the Cove Fields munitions factories, which were then located on the Plains of Abraham.
The stairs have been rebuilt many times, because they are bolted onto a rock wall subject to rockslides. Today the stairway includes a number of landings to give users a chance to catch their breath. The stairs remain a real challenge for joggers and other athletes who want to test their physical condition.

This stairway was named after a novel by Roger Lemelin, a Québec City author whose first novel, Au pied de la pente douce (The Town Below, literally “at the foot of the gentle slope”), was published in 1944. It dealt with daily life and the colorful characters of his Québec City neighborhood, Saint-Sauveur, and was quite controversial at the time.

In 1980 this stairway was named for Charles Baillargé, Québec City's architect and engineer from 1866 to 1899. He was responsible for numerous structures now considered part of the city's heritage, including several stairways. Formerly known as the Buade Stairs, these received an outstanding facelift based on 1893 plans by Baillargé himself. To get to them, go down impasse du Chien d'Or to the corner of rue Buade. The stairs take you to côte de la Montagne, from where you can admire historic surroundings that include parc Montmorency, rue des Remparts, and the Québec Seminary.