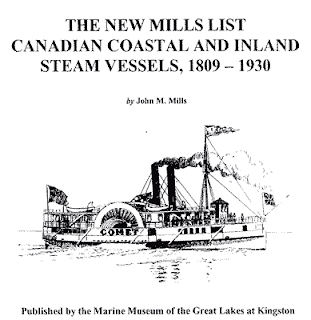 The John Molson built in 1827 at Montreal, it was powered by a mechanical sidewheel.

There is an absence of passenger lists to Canada before 1865, in many cases the captains didn't feel it necessary to keep lists of their passengers so there is little to none to research.

But, in this case, with John Molson and his St. Lawrence Steamboat Company, there are passenger lists from 1819 to 1838.
Molson, an entrepreneur in Montreal in the early 1800s, built a successful brewing business. Over the years, he had heard stories of immigrants from the British Isles to Canada who had landed in Quebec City, but if their destination had been in the western part of Upper Canada (Ontario), or in some cases, the United States, many of them would not have gone. They would have not continued on their journey because they had run out of money, and transportation was very expensive on the St. Lawrence. So they could not get to where they were going, and had to stay in Quebec City – even if it had not been their choice.


So entrepreneur John Molson supplied the boats to ferry them along the St. Lawrence River down to Montreal for a reasonable fare. Soon, passengers and freight was plying the waters between Montreal and Quebec City, a distance of 150 miles or so.

People could now continue their journey past Quebec City and Montreal, and travel onward to settlements in Upper Canada and the United States. The business idea that he had years ago had turned into a success.

The Shipslists site states, in part...

One method of proceeding inward (west) and down (south) into the United States, after arriving by Sailing Ship at the port of Quebec, was to take passage in one of the St. Lawrence Steamboat Co. Steamers to Montreal. Some records of passengers carried exist for the years 1819 to 1836, on the Steamers Malsham, New Swiftsure, Lady Sherbrooke, Car of Commerce, Caledonia, Quebec, Telegraph, Chambly, Waterloo, John Molson, St. Lawrence, John Bull, Canada, Voyageur and Canadian Eagle. These steamboat records only represent passenger movements of one company ; although large, the St. Lawrence Steamboat Company was not the only one operating on the River, from Quebec to Montreal. It is, however, the only one for which some records survive.

Advertisement: The JOHN MOLSON, Capt. C. W. Douglas, and HERCULES, J. B. Clarke, Lieut. R. N. Commander, will be employed next season as passenger boats. The formers accommodations have been considerably extended, by making a number of state-rooms in the space formerly occupied by her hold. These boats will, we are convinced, be much liked by passengers generally, as they are so entirely free of annoyance produced by the jarring of the machinery; the JOHN MOLSON in particular, has been frequently remarked for the stillness and quietness of her motion.

My 3rd great-grandfather, Henry Pyle booked passage on the John Molson steamboat on 25 May 1832, he was passenger #173 and rode in steerage for the sum of -17/6 pounds from Quebec City to Montreal. This was the John Molson's 4th trip up.

The photograph of the steamboat at the top of this entry is what the John Molson would have looked like when my grandfather sailed to Montreal.