Henry Pyle was my 3 times maternal great-grandfather born in Crosserlough, Kildrumferton parish, County Cavan, Ireland to Richard and Hariet. He had one sister, Margaret. 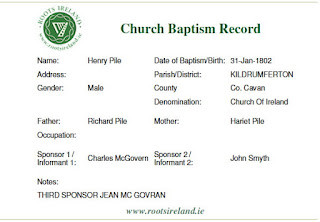 He emigrated to Quebec City sometime before 1825, became a farmer and married Jane Griffith, also from Ireland in 1825.

Henry died at the age of 96 at the Finlay Asylum for elderly men.