W is for Wolfe's Cove

Formerly the Anse au Foulon. A mile and a half above the city of Quebec. 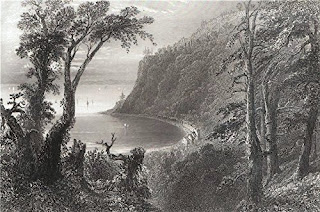 In 1759 the French had a post there, commanded by de Vergor. Early on the morning of September 13th Wolfe landed with his army at the foot of the cliffs; a small party of volunteers climbed the steep path and surprised and overpowered de Vergor's handful of men; the army followed - "In the gray of the morning the long file of red-coated soldiers moved quickly upward, and formed in order on the plateau above;" the first step had been successfully taken in the movement that led to the Battle of the Plains and the cession of Canada to Great Britain.


My Irish great-grandparents lived in Wolfe's Cove for a time, he being a stevedore working on the docks weather permitting as no ships could break through the ice of the St. Lawrence River in winter. 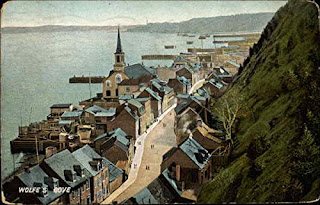 The 1800-foot-long tunnel was built by the Canadian Pacific Railways in 1930. It passes beneath Belvedere Avenue and the Plains of Abraham and was built primarily to serve as the pickup for the trans-Atlantic Empress ship. With ship traffic transferred to Montreal by the 1950s, the rail switched to freight.
While the tunnel is easily accessible by foot, one should be very careful if they choose to enter the tunnel (we do not recommend it) as the Wolfe's Cove Tunnel continues to have trains running through it, approximately 3 or 4 per week, rail transportation services only.
The South portal is just east of Gilmour's Hill, hidden under Champlain Boulevard. The North portal is accessible by West Charest Boulevard, between the streets Vincent Massey and De Verdun.