H is for Hudson

Hudson, Quebec, Canada, is an off-island suburb of Montreal, with a population of 5,135. It is located on the south-west bank of the lower Ottawa River, in Vaudreuil-Soulanges Regional County Municipality. Situated about 60 km (37 mi) west of downtown Montreal, many residents commute to work on the Island of Montreal.


Hudson is a municipality within the Greater Montreal. Although a rural agglomeration since the early part of the 19th century, the Town of Hudson was founded in June 1969 by merging the villages of Hudson, Hudson Heights and Como.
A relatively wealthy town, Hudson is known for its large, turn-of-the century houses, many of which border the Lake of Two Mountains. A ferry from Hudson takes cars across the lake (a widening of the Ottawa River) to the village of Oka.

Hudson has been dubbed "the leafy Anglo-enclave", as, unlike the surrounding mainly French-speaking municipalities, Hudson has a majority English-speaking population, although many residents speak both languages. 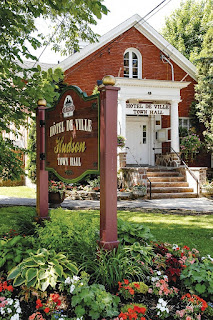 The town of Hudson is celebrating its 150th Anniversary this summer!